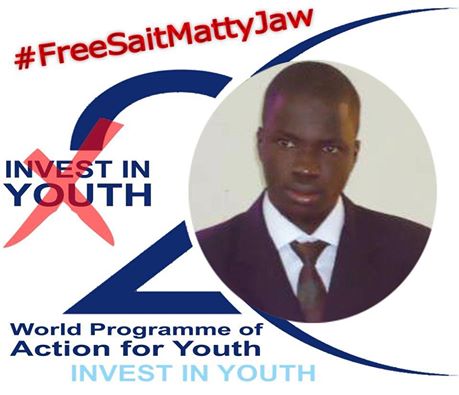 On Thursday November 6, 2014, three African SFL student leaders were brought in for questioning by the Gambian National Intelligence Agency for their alleged involvement with Gallup, Inc. Two of the students were eventually released. However, the third, Sait Matty Jaw, was arrested and has been detained without justification or explanation for over five days. That is far beyond the 72 hour limit as specified in the Gambian constitution.

Sait Matty Jaw, a lecturer at the Humanities and Social Science Department at the University of the Gambia, signed up to work with Gallup to conduct survey research in the Gambia recently along with many other students and civil servants. According to the NIA, it was Jaw’s responsibility to gain clearance for Gallup from the authorities prior to the survey’s introduction. However, because he was attending a youth conference in Azerbaijan at the time, the Gallup volunteers and supervisors were waiting for his arrival to start the process.

Upon his return, Sait was targeted by the National Intelligence Agency, which has claimed that he is solely responsible for Gallup’s activity in the Gambia. At this time, the charges against Sait have not been announced, but one thing is crystal clear: under no circumstances should failure to fill out paperwork ever be met with indefinite detainment and conducting research be considered a crime. Given that all three student leaders were questioned about their involvement with SFL, it is reasonable to assume that Sait’s arrest is in fact politically motivated.

According to Sait’s family, the NIA promised that he would be granted bail and released by 1 PM on Saturday, November 11th. However, three days later, he is still in custody. It does not bode well that the Inspector General of Police and other security outfits involved have denied that he is being detained.

As the days go by, his safety is becoming more and more uncertain. Now is the time to act. Sait’s story has been making waves in the Gambian media but so far, there has been no response from the Gambian government.

Sait was instrumental in the establishment of SFL at the University of the Gambia and everyone at Students For Liberty is deeply saddened to hear about this injustice committed against one of our African family members. We hope you will join us in rallying to Sait’s cause to show your support for human rights, the rule of law, and individual liberty in every corner of the globe.

What Sait has suffered at the hands of his own government is a gross violation of liberty. As a hard-working and selfless young leader who is optimistic about the future of Africa, he has the potential to join other SFL leaders in transforming the continent into a beacon of hope, progress, peace, and prosperity. Please share his story so that Sait can return home safely to his family and get back to work crafting a freer world. You can sign a change.org petition here.