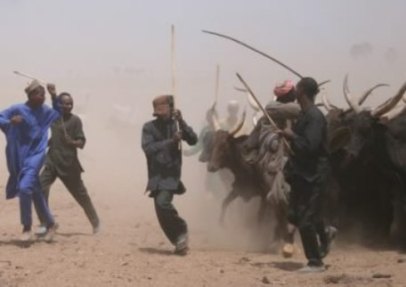 Farmers-herdsmen clashes are among the most serious security challenges facing Nigeria today, especially the northern part of the county. Tussle for the use of agricultural land is becoming intense and more prevalent. It is the most predominant resource-use conflict in Nigeria. Clashes between farmers and herdsmen over land are as old as trade in Nigeria.
Reports of bloody clashes between farmers and herdsmen have become a recurrent problem that most Nigerians are concerned about, because its ripples affect everyone in the country. Apart from being a major cause of food shortages and food price increase, thousands of lives are frequently lost; many farmlands and cattle are lost as a result of these clashes.
The Governor of Jigawa State, Sule Lamido has provided a permanent, feasible and win-win solution.  In most parts of Jigawa state, the government has established grazing reserves and water pumping windmills for herdsmen to freely nosh their herds. The grazing land is also watered frequently by the water pumping windmills for grasses to grow even during dry seasons. On the other hand, the farmers are provided with large expanse of farmland to cultivate crops. One beautiful thing about some of the farmlands is that they have dual function- they have on them facilities for dry season farming.
Water pumping windmills, cattle routes, demarcated grazing reserves and farm land are not new in Nigeria, but this writer was amazed with the stretch of the windmills, grazing reserves and farmlands. Definitely, Governor Sule Lamido must have used the physics theory of ‘series connection’. Throughout Jigawa state, water pumping windmills, cattle routes, demarcated grazing reserves and farmlands are established at strategic and well-thought locations.
Apart from promoting co-existence and harmony between farmers and herdsmen, instead of the usual conflict, a major benefit of this Governor Lamido’s initiative is that it has enhanced local community security, safety and development. Furthermore, another beautiful result of the project is, most of the herdsmen do not unnecessarily wander around in search of pasture and water because the windmills provide drinking water for their own use as well as for large cattle stocks. The multi-bladed wind pumps constantly pump water which continually irrigates the large area of the land on which lush grasses grow even during dry seasons. And finally, the herdsmen feel ownership of the land.
Farmers-herdsmen clashes in Nigeria are a problem affecting the entire Nigerian society. However, Governor Lamido has brought a new dimension to solving the problem. Therefore states and the federal governments should model this beautiful solution. Modeling this solution will be very easy because water pumping windmills are economical and environmentally friendly and Nigeria has demarcated grazing reserves, marked cattle routes and large farming areas.
Zayyad I. Muhammad writes from Jimeta, Adamawa State, zaymohd@yahoo.com