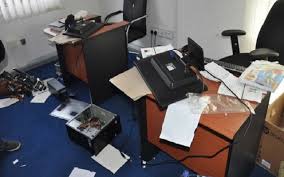 The Department of State Services (DSS) has released a list of 24 items it recovered from its raid on the All Progressive Congress (APC) data office in Lagos.

In a statement on Monday by its Deputy Director, Public Relations Marilyn Ogar, the DSS insisted that it acted on a petition that alleging an ongoing cloning activities of INEC Permanent Voters Card (PVC) by some unscrupulous persons with intent to hack into INEC data base, corrupt it and replace them with their own data at No. 10 Bola Ajibola Street, off community Avenue, Allen Avenue, Ikeja LGA, Lagos State.

The statement reads in part: “Consequently, the Service placed the premises which had no Signpost under surveillance and was convinced that unwholesome activities were ongoing within.

“On 22nd November, 2014, a search operation was executed at the above address were a Search Warrant obtained from the Court was executed.

“The search was carried out in the presence of one Onuchukwu Chika AUGUSTINE and twenty four (24) others, while and the following items were recovered: One server, Four hard drives, One external hard drive, One HP Laptop, One Server switch, Fourflash drives, One Samsung tablet, One Apple computer system without CPU and thirty one Ghana-must-go bags containing hard copies of already captured data.

“All items recovered were documented at the back of the Search Warrant signed by the Service team leader and was witnessed by two occupants of the premises; Onuchukwu Chika Augustine, an IT personnel and Olaposi Fayemi, a supervisor on duty.”

“Photographs (still and video) of service personnel entering and exiting the premises in an operation that lasted for two hours were taken.

The APC alleged that the DSS had now become one of the enforcement arms of the PDP and that the real reasons the service broke into its offices were to deprive it of its membership data base as well as to aid and abet the rigging of the 2015 elections.