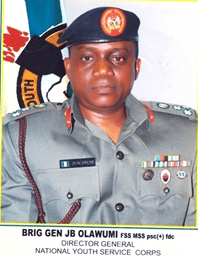 Corps members need to be alive, strong and healthy before they can contribute effectively to national unity and economic development in the country, the Director-General of the National Youth Service Corps (NYSC), Brigadier-General Johnson Olawumi, has said.

“Safety of corps members is paramount to us at NYSC and is non-negotiable,” Brig-Gen Olawumi said over the weekend after visiting Mr. Oluwagbenga Babatunde, a corps member involved in an auto accident on his way to orientation camp and currently on admission at the University of Benin Teaching Hospital (UBTH), Benin, Edo State. “We will continue to do everything to keep corps members safe and secure and we will also continue to respond promptly to anyone of them who is in distress in any form.”

While in Benin as part of his tour of NYSC orientation camps for 2014 Batch C, which opened on 4th November, the DG learned about the case of Mr. Babatunde (Call-up Number: NYSC/LUT/2014/246634) who was involved in an auto accident alongside five other corps members on their way to NYSC orientation camp in Bayelsa State. The others sustained minor injuries and have since been discharged, but Babatunde had to undertake surgery for fractured bone.
“I decided to come here personally to wish him quick recovery, to show that the country places a lot of value on the security and the lives of these young people and to show that we appreciate the enormous sacrifice and contributions they are making for and to the country,” Brig-Gen. Olawumi said. “The least we can do is to continue to ensure their safety at all times. And we will continue to do that in different ways, including enhanced security in the orientation camps, in the NYSC lodges and their places of primary assignments, during special assignments such as the conduct of elections, and through prompt response to those in distress using the instrumentality of our upgraded distress call centre.”

In line with the welfare package for corps members, the NYSC DG directed prompt payment of Mr. Babatunde’s hospital bills and promised to grant his redeployment request to allow for his full recuperation after surgery. The DG also personally gave financial support to the mother of the accident victim who had come all the way from Ibadan to attend to his son. “After the accident, I thought I was on my own here at the hospital until the NYDC DG suddenly walked in and paid all the bills,” said an elated Mrs. Babatunde.

The DG used the occasion to thank the management of UBTH for the quality of treatment they accorded the injured corps members. He also expressed appreciation to the management of Cross Country Transport Company for rushing the affected corps members to a proper hospital, for dispatching their manager and staff to visit the hospital and for making initial payment for their treatment. “This is very commendable,” said the DG. “May I use this opportunity to call on other stakeholders to emulate this wonderful gesture and always come to the aid of corps members and the Scheme to enhance our capacity to contribute more to national development.”

It will be recalled that the DG is visiting orientation camps across the country to observe first-hand the state of the camps and to address emerging challenges. By the weekend, he had been to NYSC camps in FCT, Ondo and Edo states. At the different stops, he interacted with corps members and expressed satisfaction with how digital registration has eliminated the stress that corps members used to go through during registration in camps. Some of the corps members told the DG they completed their camp registration within minutes unlike before when it took many hours and even days.

While urging corps members to take the service year seriously and make service the watchword, he has also been assuring them that the Scheme will do everything possible to continue to enhance their welfare and safety.