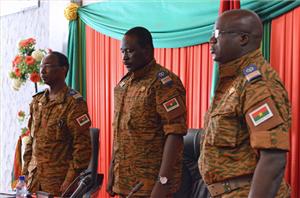 The Centre for Democracy and Development, CDD, has called on the military junta in Burkina Faso junta led by Lieutenant Colonel Yacouba Isaac Zida to hand over power to civilians with immediate effect.

In a press statement(available at cddwestafrica.org) dated November 3, 2014 and signed by CDD Director, Idayat Hassan, the centre noted that the Burkina Faso uprising against former Burkina President Blaise Campaore’s dictatorship was people-drive and led by civil society and opposition political parties, thus, the military cannot seize power in a process it did not participated.

“The military cannot and should not be allowed to sieze power in a context in which they played no role in the evolution of people’s power leading to the ouster of the Compaore regime. Indeed, many of the leaders of the military have been core players in the Compaore dictatorship,” the press statement stated.

It noted that since the usurpation of power on October 30, 2014, when massive protests forced President Blaise Compaore to cede power and escape with his family to Cote d’Ivoire, there has been a number of announcements by military officers that they have assumed the leadership of the country and made promises about the establishment of a broad-based transitional government that will conduct state affairs until elections are held within a year.

However, the citizens have continued to call for the Military to return power to the civilian, a position supported by CDD. The Centre states that the military should remain in the barracks and allow a civilian led interim government to organize elections for a new government.

“The Centre for Democracy and Development (CDD) strongly supports the position of Burkinabe civil society and opposition parties that the military should remain in the barracks and that the “forces vives de la Nation” which prepared and led the insurrection at the cost of many lives should appoint an interim government which would immediately organise elections for a new government.”

The Centre draws attention to the fact that both the African Union Charter on Democracy, Elections and Good Governance and Economic Community of West African States Supplementary Protocol on Democracy and Good Governance completely reject any form of unconstitutional change of government along the lines proposed by the Burkinabe military, noting that Africa has turned its back on military rule.

“The Centre for Democracy and Development also wishes to draw attention to the fact that the attempt by Blaise Compaore to extend his mandate beyond 2015 is sadly becoming common place in Africa. Already, a number of African leaders have amended their country’s national constitution to extend their tenure against the wishes of the people. This has happened in Algeria, Cameroon, Chad, Djibouti, Equatorial Guinea, Gabon, Togo, Uganda and Zimbabwe. The development in Burkina Faso is a reminder to sit-tight African leaders that people’s power is today a potent force capable of throwing out dictators from power,” CDD stated.

CDD further calls on the African Union, the Economic Community of West African States, and the international community to ensure that civilians are allowed to determine the future of the country while the military maintains their constitutional role of safeguarding the territorial integrity of Burkina Faso.

The present crisis in Burkina Faso was as a result of an attempt by the former Burkina President Blaise Campaore to amend Article 37 of the Constitution to allow him to stand in the 2015 general election after 27 years in power. On Thursday, October 30, 2014, over a million Burkinabes stormed the National Parliament were the amendment is to take place and destroyed it. The massive protests by the Burkina people forced President Blaise Compaore to quickly cede power and escape with his family to Cote d’Ivoire.