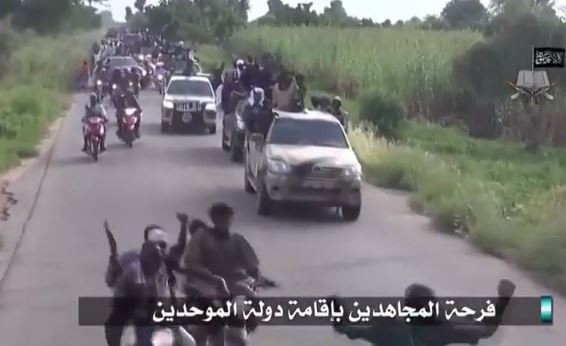 The Islamists raided Hong and Gombi, some 100 kilometres (62.5 miles) from the state capital, Yola, after they were pushed out of the commercial hub of Mubi, which they seized two weeks ago.

Boko Haram is thought to have captured more than two dozen towns in Yobe, Borno and Adamawa states in recent months, as part of its quest to establish a hardline caliphate in the region.

But despite apparently losing control of Mubi, which the Islamists renamed Madinatul Islam or “City of Islam” in Arabic the invasion of Hong and Gombi saw them move closer to Yola.

Thousands of residents have been taking refuge in the city from the violence.

The vigilantes had reportedly reclaimed the town of Maiha on Wednesday after a fierce battle in which scores of the ins?urgents were said to have been killed, although there was no official confirmation.

In Gombi, resident Haruna Awwalu said Boko Haram were patrolling the streets, firing heavy weaponry, while another local, Rabi Tanimu, said people were cowering indoors and many had fled into the bush.

“They have burnt down the police station, the local government secretariat and the market? after overpowering the police, ” Awwalu said.

In Hong, 20 kilometres away, the police station was also razed and the militants raised their black flag outside the home of a retired military general.

Chibado Bobi, chief of staff in Adamawa state governor’s office in Mubi confirmed that civilian vigilantes and hunters had recaptured the town.

“It is true Mubi has fallen back into the hands of Nigerian soldiers with the help of local vigilantes and hunters,” he said.

“It is however too early for residents who fled to move back to Mubi because the security and vigilantes need to mop up all remnants of the group that may be lurking in nearby areas.”

One resident, who asked not to be named, said about 200 vigilantes and hunters armed with den (home-made) guns, spears, clubs, bows and arrows, and machetes were involved in the recapture.

“I saw the Boko Haram fighters fleeing in droves in their vehicles when the hunters and vigilantes entered the town”, he added.

“Their emir? (leader) was captured by the hunters and made to sit outside the military barracks that he and his men turned into their base.

“He had his hands tied from the back and we swarmed to have a look but we were later dispersed by the hunters.”