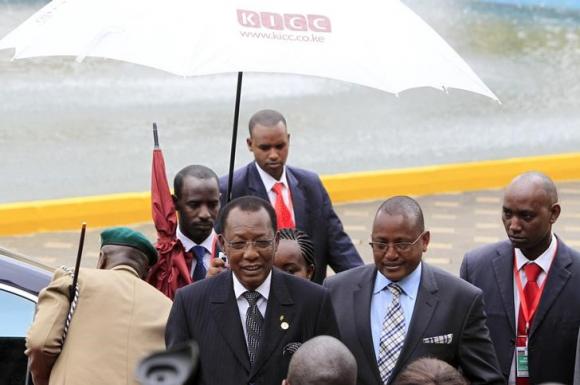 Chad’s President Idriss Deby, a wily survivor of rebellions, is looking to bolster his powerbroker role in the Sahel and his nation’s own security by backing peace talks between neighbour Nigeria’s government and Islamist Boko Haram insurgents.

The Boko Haram rebels, whose five-year revolt has killed thousands and caused mayhem in the northeast of Africa’s biggest economy Nigeria, have been threatening Chad’s own frontiers and disrupting cross-border trade.

With jihadist fighters prowling Libya’s deserts to the north, al Qaeda in the Islamic Maghreb active in the west, and rebels and janjaweed militia battling in Sudan’s Darfur region to its east, Chad already finds itself in the eye of the storm.

Deby, a former fighter pilot who took power in a 1990 coup, survived offensives by Sudan-backed rebels in 2006 and 2008. He can ill afford a violent Islamist onslaught by Boko Haram in the southern Lake Chad border region of his oil-producing nation.

To pre-empt this threat, Deby’s government quietly started in September mediating negotiations between Nigeria and Boko Haram, aimed at securing the release of 200 schoolgirls seized in April in the northeast Nigerian town of Chibok. Nigeria’s military unexpectedly made the initiative public last month.

Chad says the peace talks are still on track despite a recently released video that appears to show Boko Haram leader Abubakar Shekau saying the Chibok girls had been “married off” to his fighters, contradicting an earlier announcement of a deal to release them.

“We have a huge interest in resolving these talks,” said a senior Chadian diplomat, adding that Boko Haram’s activities in the porous frontier around Lake Chad were difficult to control.

A breakthrough on the talks would help Deby strengthen his reputation as a regional powerbroker, a role welcomed by former colonial ruler France as it seeks to stop being ‘Africa’s policeman’ and hand that job to local African allies.

“One reason for Chadian involvement is the country’s posturing as a regional hegemon,” said Ryan Cummings, chief analyst at crisis management group Red 24.

Chad’s army is considered one of Africa’s most battle-ready and played a frontline role alongside the French in an operation in 2013 against Islamic fighters in Mali’s desert north.

Its soldiers also formed the backbone of an African Union peacekeeping mission in Central African Republic to the south, until they withdrew after U.N. accusations of killing civilians.