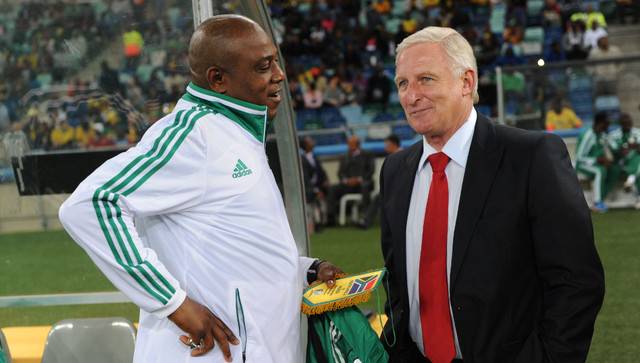 South Africa’s delegation of 26 players and 15 officials for the last Group ‘A’ 2015 Africa Cup of Nations qualifying match with Nigeria are expected to arrive Uyo today ahead of the Wednesday encounter.

According to the Spokesman of the Nigerian Football Federation (NFF), Ademola Olajire, the Glass House was working round the clock to ensure that the South Africans who do not have a landing permit t the Ibom International Airport are able to do so when they arrive. “Although the South Africa Football Association does not have the permit to land their chartered aircraft at the Ibom International Airport, the Nigeria Football Federation is working round the clock to ensure permit is granted for their plane before it departs Johannesburg at 1pm on Monday (today),” observed the NFF spokesman.

He also confirmed yesterday that the Confederation of African Football (CAF) has picked Rajindraparsad Seechurn of Mauritius as Referee for Wednesday’s qualifier between Nigeria and South Africa. Seechurn will be assisted by countrymen, Balkrishna Bootun as Assistant Referee 1, Vivian Vally as Assistant Referee 2 and Parmendra Nunkoo as Reserve Referee. To underscore the importance of the match, CAF has appointed Camerounian Abel Mbengue as Security Officer, to assist the Match Commissioner, Laryea Louis from Ghana.