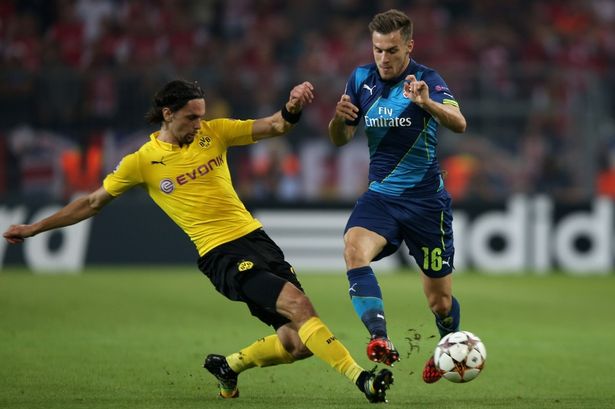 Arsenal host a Dortmund side on the back on a poor run of results. Before the international break, the Gunners famously surrendered a comfortable 3-0 lead against Anderlecht at the Emirates and this was followed with another dismal result against Swansea in the league. The match against Manchester United last weekend was one of the best attacking displays I’ve seen from the team in a long while but as always, the Gunners shot themselves in the foot as a Gibbs own goal and a Rooney clincher which  was enough to give the visitors their first away victory since April.

Tonight the Gunners come up against a Dortmund side that has been hot in Europe but cold in the team Bundesliga. For a team so formidable in recent years, picking up just 11 points from 12 games has seen the German outfit have their worst start in a very long while. The Gunners are also struggling in the Premier League notching up 17 points from 12 games as well.

To injuries, the Gunners are very likely to be without the duo of Wojciech Szczesny and Jack Wilshere that suffered injuries in the defeat to Manchester United. The regulars are still out and with Theo Walcott suffering a groin strain, he’s going to miss tonight’s clash. On the bright side, Arsenal’s French pair of Laurent Koscielny and Olivier Giroud are back but the HFB is going to miss tonight’s game as well as the game against Galatasaray next month because he’s ineligible. Dortmund have injury concerns of their own with the influential Marco Reus suffering an injury in the game against Paderborn. The Germans will also ne without the likes of Sven Bender, Mats Hummels, Oliver Kirch, Nuri Sahin, Sokratis Papastathopoulos and Jakub B?aszczykowski.

To team news, Emiliano Martinez is odds on to start in goal but the question remains whether Arsene Wenger would throw Koscielny straight into the mix instead of sticking with the Mertesacker – Monreal central defensive combination. Say what you want about the Spaniard but he has been better than Mertesacker in the recent games they’ve played together. The English pair of Kierab Gibbs and Calum Chambers would maraud the flanks.

Mikel Arteta would obviously start ahead of Mathieu Flamini and he’d be odds on to play alongside Aaron Ramsey. The Welshman hasn’t hit top gear this season but he recently stated that he’s getting fitter with each passing game. Santi Cazorla is a player going through some struggles as well but with Wilshere out injured and Tomas Rosicky clearly out of favor, the diminutive Spaniard would have another chance to get a run out. I expect the pacey attacking combination of Danny Welbeck, Alexis Sanchez and the Ox.