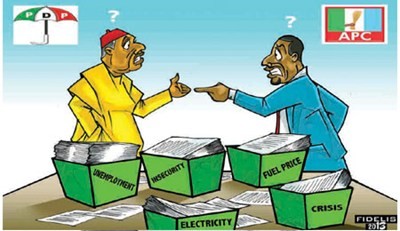 NATIONAL leadership of the Peoples Democratic Party, PDP yesterday challenged the opposition party, the All Progressives Congress, APC to a debate where achievements of President Goodluck Jonathan led government would form the discourse.

According to PDP, the APC which is the main opposition has no meaningful programme for Nigeria.

The leadership of the party also insisted that all the forthcoming general elections must hold in the crisis ridden North-East States in 2015 as scheduled despite the security challenges in the Zone, just as PDP said that if governors of affected states had woken up to the task of addressing the challenge of insurgency, the problem would not have got to this magnitude.

Adamawa, Borno and Yobe states out of the six states are the front line states and presently under state of emergency.

Speaking yesterday on Kiss FM 99.9 and monitored by Vanguard in Abuja, PDP National Publicity Secretary, Chief Olisa Metuh stressed that there was no reason why the Independent National Electoral Commission, INEC will not conduct elections in these areas as being agitated in some quarters.

Metuh said, “after all these states which are being controlled by the opposition had successfully conducted Council elections at the peak of insurgents while bye-elections to the state and National Assemblies were held during the period,so,what are they saying?

“If the State Governors in the affected states have been alive to their responsibilities as being done by the PDP controlled Federal Government,the situation would have been brought under control,rather they are busy attacking the President and our Party as responsible for the insecurity and that elections will not hold in the affected states,elections must hold and PDP will spring surprises.