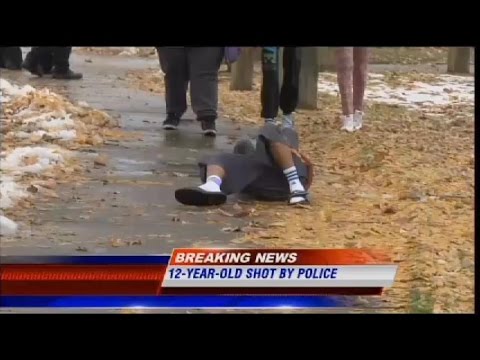 A video was released on Wednesday showing the police officers involved in the killing of the 12-year-old African-American boy who was carrying a fake gun in Cleveland, Ohio.

Tamir Rice was shot by officers on Saturday and was rushed to a local hospital, but was pronounced dead on Sunday morning.

The officers involved said the boy refused to raise his hands and tried to pull the fake gun from his waistband outside the Cudell Recreation Center in Cleveland.

However, the video released by the state police on Wednesday clearly shows that one of the officers shot the boy seconds after he got out of the patrol car.

The video, containing stuttered images with no sound, shows the boy walking and pointing his fake gun in different directions. He then enters a gazebo before officers arrive in their patrol car. The first officer, Timothy Loehmann, gets out of the car and shoots the boy instantaneously.

Deputy Cleveland Police Chief Edward Tomba said the release of the video should not be regarded as a way to explain actions taken by the officers or the young man.

The incident has sparked anger among the residents of the community. The US is already reeling from the aftershocks of a grand jury decision over the death of another black teenager in Missouri which sparked massive protests across the country over the past two days.