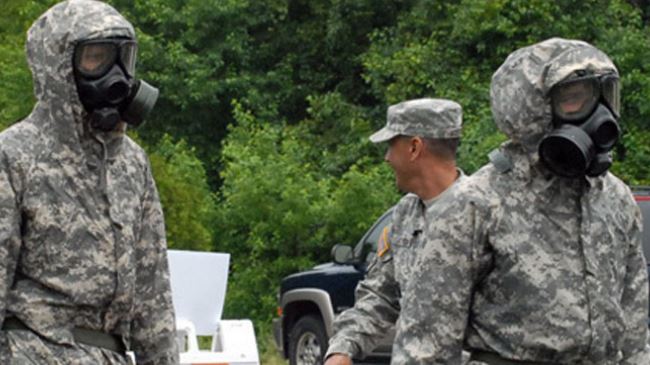 The United States is using the guise of the Ebola virus outbreak to expand its intervention in Africa, a civil rights activist and journalist in Detroit says.

Abayomi Azikiwe, editor of the Pan-African News Wire, made the remarks in a phone interview with Press TV on Tuesday while commenting on the Pentagon’s decision to isolate and quarantine US soldiers returning from West Africa.

Two US states — New Jersey and New York — have already ordered a mandatory 21-day quarantine for medics who have treated Ebola patients in West Africa, where the epidemic has already killed about 5,000 people.

“I strongly believe that the United States should provide more assistance to the three countries that have been stricken by the outbreak of the Ebola virus disease,” Azikiwe said.

“Nonetheless, I believe there has been an overreaction inside the United States, largely fuelled by rightwing political forces to stigmatize and isolate and quarantine all those who have been assisting in the healthcare mechanisms for those who have been stricken by the Ebola virus disease in Sierra Leone, Guinea and Liberia,” he added.

Azikiwe stated that the US Africa Command (AFRICOM) is “designed to extend the United States’ military intervention on the African continent.”

“They are utilizing AFRICOM to penetrate Africa under the guise of treating or responding to the Ebola virus outbreak,” he emphasized.

President Barack Obama has authorized the Pentagon to deploy troops to West Africa to fight the spread of the deadly disease. Under the president’s order, some 3,600 troops could be sent to West Africa. Hundreds of US soldiers have already been deployed to Liberia.

Azikiwe went on to say that “it is important for those soldiers, who have been stationed in Liberia, ostensibly in response to the Ebola virus disease outbreak, that they be protected.”

“The United States’ government does not have a history of protecting its own soldiers. We know that in Iraq they were exposed to depleted uranium weapons; we also know that US chemical weapons, that were utilized by the Iraqi government in the 1980s in their war against Iran, these weapons were in Iraq. They were discovered yet the discovery of these weapons, the information was concealed by the United States’ government and the corporate media,” the veteran journalist continued.

“So we are concerned that those who are in West Africa right now, in Libra particular, be protected, and their health and lives are given maximum priority,” he stressed.

There is currently no known cure for Ebola, which is a form of hemorrhagic fever with diarrhea, vomiting and bleeding as its symptoms.

The Ebola virus spreads through direct contact with infected blood, feces or sweat. It can also be spread through sexual contact or the unprotected handling of contaminated corpses.

Recently, more experts have said that the Ebola virus is a genetically modified organism and was developed in US bio-warfare laboratories in West Africa.

In a recent interview, Dr. Francis Boyle of the University of Illinois said, “My opinion is that the origins of the current pandemic came out of the USA bio-warfare labs in West Africa.”

He added that the US has been “using West Africa as an offshore to circumvent the Convention on Biological Weapons and do bio-warfare work.”