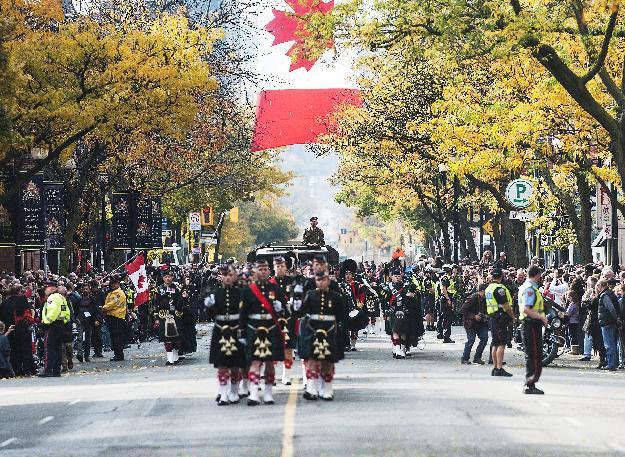 Thousands of mourners lined the streets of the Canadian city of Hamilton for the funeral procession of a soldier killed last week in an attack in the nation’s capital.

Wailing bagpipes and a solitary drum beat broke a solemn silence as hundreds of soldiers, veterans and police officers marched alongside the flag-draped casket of Corporal Nathan Cirillo to a cathedral in his hometown.

His bereaved family, including his six-year-old son wearing his father’s beret, also participated in the funeral procession, viewed on television by millions nationwide.

Cirillo was fatally shot last week while standing watch at the War Memorial in Ottawa. His attacker, Michael Zehaf-Bibeau, then stormed into parliament and exchanged fire with police before being shot dead.

The attack was one of two targeting Canadian soldiers just days apart. Another soldier, Warrant Officer Patrice Vincent, was killed on October 20 in a hit and run east of Montreal. He will be laid to rest on Saturday.