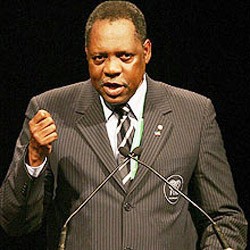 Nigeria football looks to be, unfortunately, heading into a long, dark night as world football –governing body is set to wield the big stick  today against the most populous black nation on earth.

Even as the Super Eagles still have a chance of qualifying for the 2015 Africa Cup of Nations to defend their crown, despite a poor start in the race; even with the Golden Eaglets, the reigning champions of the world, ready to compete at the African Championship to be eligible to travel to Chile to defend their world title next year, and with the Super Falcons reclaiming their continental title in Namibia on Saturday, non –conformity to simple football rules and regulations has put Nigeria at the danger of a big slam.

On Saturday in Windhoek, Namibia, CAF President Issa Hayatou told Nigeria’s Sports Minister, Tammy Danagogo in clear terms that the world was fed up with Nigeria’s incorrigibility in the area of football administration.