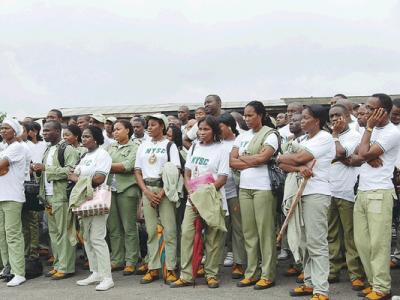 I was almost joining protests against what I initially thought were exploitative and unnecessary  steps being taken by the National Youth Service Corps (NYSC) over the online registration of prospective corps members. I observed quiet a few opposing views to it Many of which queried why fresh graduate should be asked to pay such outrageous amount. I was almost joining the bandwagon because of the preponderance of opinion.

Fortunately for me, Japheth Omojuwa  weighed  in on the matter and invited the NYSC DG for a tweet chat which threw light on the whole matter. The NYSC DG stated that the 4000 is optional and not mandatory I quickly paused and retraced. And may I say the bandwagon effect on social media particularly twitter is epic anyway I  discovered I was on the verge of barking up the wrong tree.

As I discovered from the DG that day, that  the N4000 for printing of call up letter was not mandatory for all prospective corps members. I had to check the tweet from the DG that states that particular line again to be sure it says the correct thing.  The 4000 is not mandatory and prospective Corp members who wished to  go to their institutions to pick up theirs can do so without any penalty. I wanted to be sure I was not getting the whole thing mixed up.

From then, I started wondering what would have caused the uproar about the fee. My thinking was this may well be smacks of mischief and hypocrisy or how would  you describe a situation where people raise opposition to a fantastic opportunity for students who schooled very far away from their home and foreign students?

I was posted to Lagos, I schooled in Abeokuta. You know what transportation cost is even from Lagos to Abeokuta. But if mine was easy as it may seems, what about my foreign students friends? They all narrated their ordeal at processing and getting call up letters in Abuja while in camp. Having to travel to Abuja severally and all  the stress and risk involve with traveling by road in Nigeria or even flying is enough to pay more than N4000 for. But that is even for a foreign students, what about Kolapo who lived in Lagos but schooled at Ahmadu Bello university Zaria? Should he travel about 16 hours to pick up call up letter? And let’s assume he is posted to Akwa Ibom, he would have to be on the road for about 3 days. Now, I have lost count on how many prospective corp members that have lost their lives during transit with this arrangement in the past.  Makes me wonder why the initiative didn’t come earlier, maybe those lives would have been saved.

The NYSC position that it is optional makes it  a matter of choice. It’s like having rice to cook at home but you closed late from work and  you choose to visit Tastee fried chicken (TFC)  to get rice. The most important thing is you get to eat rice either way but considering various variables you choose which is best for you. You got to a car station, you are presented with an option of  an automatic or a manual, both of course having same functions. A car is car but of course the choice is yours based on certain variables that you might have considered. Now we want the NYSC to provide the service for free? That’s where the hypocrisy comes in. If you accept that we should have public and private varsities, then you have no moral ground to continue to complain about this fee. Why? Because we have come to accept the reality that at some point the society needs to be presented with a choice of the same service. And the alternative may not be cheap. I paid 14K per year throughout my 5years in the university when you press your calculator the entire fee is not up to half of what Covenant university  pays in a year. But maybe I digressed a little. Fact is the man who went to Covenant university and myself, either way, are both graduates of a university in Nigeria  but I chose which is best for me based on certain things I considered. You tell us there are no free lunch in Freetown, you believe there is no way LASU students should pay as low as 25K becoause it’s too small and you didn’t talk about government funding Education to at least meet up UNESCO’s standard of 26.6%. How do you want me to listen when you say Government should cater for the N4000 charge in its budget. It is the height of hypocrisy in my opinion. I look at the NLC position on the matter for instance, nothing best describes the hypocrisy of the NLC. Last year during the ASUU struggle the only role  a supposed workers and Masses movement played was to to be use as conduit to  pressurize  its affiliate to give in to Government. Various other disgraceful roles of the NLC from 2012 till date are well documented. Now it sees an opportunity in here to score cheap popularity the NLC opposition to it is misleading, lame and could be detrimental to this laudable initiative.  We are talking about Government reducing it’s spending right? But we want this to be in 2015 budget. I see “Kagawa’s logic” at its very best here.

Some people  believe we should dismiss the claim that it is optional. They based their argument on the fact that this is Nigeria and we are Nigerians and as such sooner or later, the fee will be made compulsory for prospective Corp members . I think why the country remains the way it is, is because we have come to accept absurdity as the norm. We say “Sebi this is Nigeria, certain things must be abnormal and we will accept it”. If we as citizens do not think the promise the organisation made about it not being mandatory is a promise it must live up to,  or if we do not not think the onus is on us as citizens to hold them accountable to their words, then we are the real problem here. I believe this is what the agitations should be all about. Not outright scrapping of the initiative. Our concern should be that the services are also provided for a Bimbo who schooled at the University of Lagos but stays in Ikorodu. Ensuring she still has the option of going to Akoka to pick her call up letter. That option must stay intact for as long as the other exist. That is where the docile national assembly members looking for popularity can come in, that is where NLC can hold the NYSC accountable not rejecting this laudable initiative and its lifeline  in its entirety.