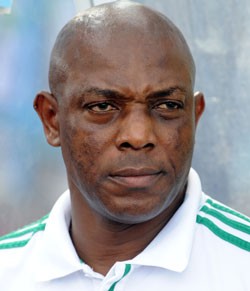 Fellow Nigerians I am writing this with a heart full of pain and disappointments. I knew that Stephen Keshi’s enemies are still in the glass house but what beat my imagination is I never knew that his enemies are the dumb ones. Nigeria Football Federation, NFF, has finally gotten rid of the first black coach to win a Nations Cup for Nigeria, the first Nigerian Ex-International who became a coach and led Nigeria to the senior world cup. The first exportable coach from Nigeria. A coach that created stars from local clubs when they said home-based players are training materials. We can talk about the Mbas, Obuabunas, Reuben Gabriels today because a Stephen Keshi was here. The most painful part is that it was done in a very disrespectful manner. A coach with such a delicious profile should not be made to look like a scum. From hero to villain. From the celebrated to the rejected one. I think they should have given him a little time to win back the lost love then give him a befitting exit. What kind of human being does this? This man won his game with Sudan for Christ’s sake.

For some time now Nigerians have like they always did been calling for a change of coach but what they got is a disaster! How can one replace Stephen Keshi with the bitter-kola chewing Amodu Shaibu? Yes you may say he has always done the dirty jobs but this is not progressive because he is always replaced with a foreign coach after qualifying the team for any competition… this is a bad sign in my books. It looks like in the glass house Amudu is seen as the mercenary who comes to do the dirty jobs and finally gets treated like a sinner. At this point, I just blame Stephen Keshi for not following his heart in South Africa when he was singing the resignation song. Listening to Nigerians and Dr. Mike Adenuga was the worst mistake of his life. Keshi would have bowed out when the ovation was loudest but we deceived him, dragged our hero into the mud and stoned him.

Now that Stephen Keshi is gone, one would think that the NFF or who ever that is controlling the masquerade would be making moves in the right direction but with the handwriting on the wall, we are heading back to where the rain was beating us mercilessly!

I know that Amodu has been made an interim coach so that the vampires will take their time to find a foreign coach they will use to siphon money…. This they have missed since the arrival of Keshi. They will bring a foreign coach that knows nothing and cares less about our football. He will come and bamboozle us with media hypes, give us lofty hope and dump us! This MOFOS in the glass house won’t see the likes of Sunday Oliseh or even Samson Siasia( now the under 23 team coach) to contract, they will bring a white man they can use as a conduit to suck out funds… criminals in the glass house.

Where are we really going? Definitely it is not forward.

My question is, is this move Amuju Pinnic’s “acceptance speech” or is he being remoted by the wolves because this sack resembles what the pre Maigari NFF would do. Now that Maigari is gone, have we swerved into the dark lane? “Time will tell” (in Bob Marley’s voice)

The Writer, Paschal Oge Chikero is the founder of Chikero Online. He tweets as @sirchikero.