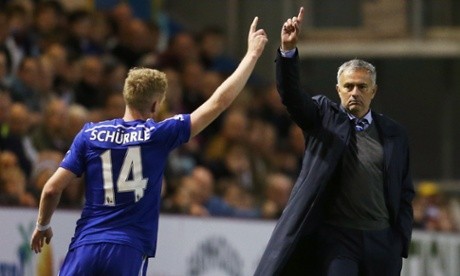 Andre Schurrle has opened up on what working under Jose Mourinho at Chelsea is like and revealed that the Portuguese manager even instructs them to foul opponents.

The German winger said that Mourinho has a strong winning mentality and hates to lose – a trait he admits is very infectious.

“Jose Mourinho has taught me a different style of play and a different way of thinking to reach the world-class level someday,” Schurrle told SportBild.

“To him, finishing second is a failure. He doesn’t know the word ‘losing’. That’s how he holds his talk before the matches. His thinking is impressive – as impressive as the way he gets his message across.

“He challenges you to be robust on the pitch, to play like a man. To commit a foul. I feel much better since joining Chelsea and I have become much more confident.”

Schurrle was Mourinho’s first signing after he returned to Stamford Bridge in the summer of 2013 and he has scored two league goals already this season.