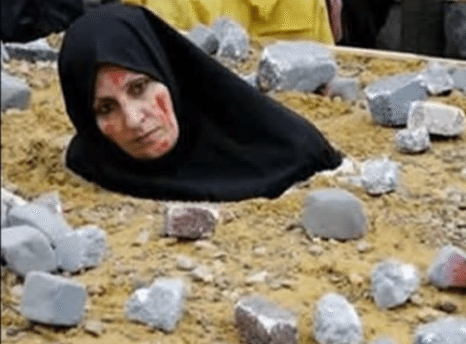 A man and a woman have been stoned to death for adultery in separate executions in jihadist-controlled areas of Syria, a monitoring group reported on Tuesday.

The man was executed in Idlib province in an area controlled by Islamist groups including the Nusra Front, Al Qaeda’s official affiliate in Syria, said the Syrian Observatory for Human Rights, which tracks violence on all sides of Syria’s civil war.

It is the first documented case of a man being stoned to death for adultery since Syria descended into civil war in 2011 and hardline Islamic groups emerged as powerful players in areas that slipped from government control, the Observatory said.

The woman was executed in Hama province in an area controlled by Islamic State, an Al Qaeda offshoot that has seized swathes of Syria and Iraq and is being targeted by U.S.-led air strikes, the Observatory said.

A video posted online appeared to show her execution. A bearded fighter is shown passing down the sentence in the presence of other gunmen and her father, who appears to approve of her execution.

Her hands and feet are then tied with a rope and she is forced to kneel in a pit. Covered head to toe, she begins to pray out loud as large rocks are seen striking her body. The video shows the logo of Islamic State.

The two incidents, which Reuters could not independently verify, appear to be unrelated.