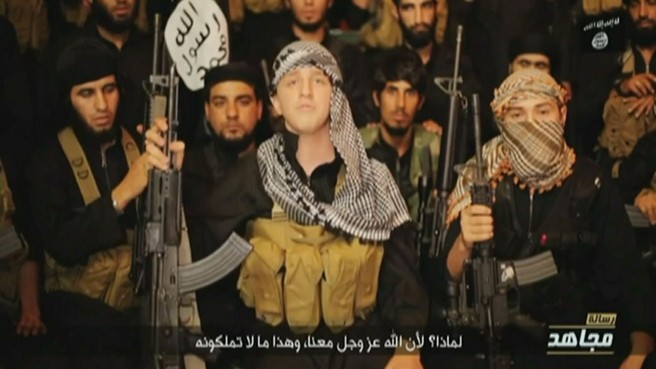 Ginger-haired Australian jihadist Abdullah Elmir, 17, has been condemned by his relatives over a chilling video in which he declares ISIS will not stop their murderous campaign ‘until the black flag is flying high in every single land’.

In a propaganda video for the terror group published on YouTube, the young white, Sydney born man calling himself Abu Khaled from Australia is flanked by other ISIS fighters.

Elmir reportedly told his mother he was ‘going fishing’ when he disappeared from his home in Bankstown, west Sydney, in June.

In the video, Abdullah Elmir made threats against Australia, America and Britain, warning the terrorists can’t be stopped.

It is believed to be the first time Prime Minister Tony Abbott has been explicitly mentioned by name in an Islamic State propaganda tape.

“To Obama, to Tony Abbott, I say this: These weapons that we have, these soldiers we will not stop fighting, we will not put down our weapons until we reach your lands”, he said.