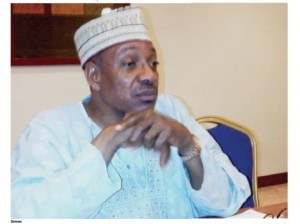 Reports have it that two intending aspirants of the People’s Democratic Party, PDP, Dr. Abdul-Jhalil Tafawa-Balewa and Prof. Akasoba Duke-Abiola, were at the national secretariat of the party in Abuja on Tuesday to purchase presidential nomination forms, but they were turned back.

We were also told that Tafawa-Balewa stormed the party’s national secretariat on Tuesday, with his supporters and bank tellers, with which he had hoped to purchase the presidential nomination and expression of interest forms.

The bank tellers indicated that he deposited N22m into the account of the party with Zenith Bank. He paid the money into the party’s account Number 1012436478 with the Zenith Bank.

However, instead of being issued his forms, he claimed that he was told by officials of the party that the forms were not ready, meanwhile the party is expected to stop the selling of forms to all the aspirants on Thursday.

Tafawa-Balewa said he was told that all other forms were on sale except the presidential nomination and expression of interest forms,adding that, “I have paid for my forms. I was however told that they don’t have the forms ready. No matter, I am still here. I will send some of my people here on Thursday to come and pick the forms.”

He also said,  said he went to the office of the Secretary of the party, Prof. Wale Oladipo, and the National Organising Secretary, Alhaji Abubakar Mustapha, but was denied the forms.