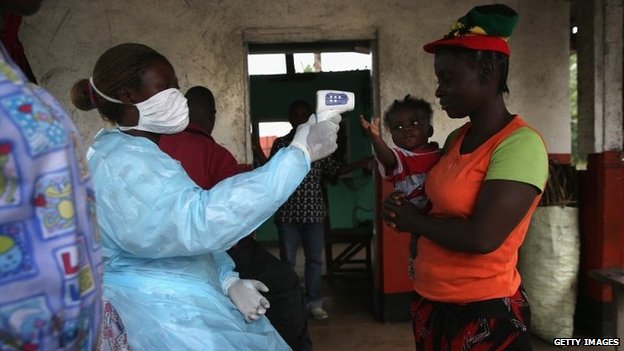 Henry Boley left Liberia to attend a conference in Nigeria just days after his twins were born. Now, weeks later, he can’t get home. Amanda Johnson, a 50-year-old Liberian living in Ghana, awaits her fiance’s departure from their home country for their wedding, but refuses to return home because of Ebola.

Hundreds of Liberians are stranded in Ghana, separated from their families because of poverty, fear and logistics. Some are waiting for flights to resume after most airlines cancelled flights to Liberia. Others are having trouble navigating or affording the circuitous route back by bus. Many others feel it’s too risky to return home, even if their spouses or children are desperately urging them to.

Boley and Johnson are neighbors in a camp for refugees just outside Accra, the Ghanaian capital, where they monitor the news for any signs that Ebola is slowing down in their home country. Their exile is likely to continue as the worst outbreak of the disease in history continues infecting more people in Liberia, Guinea and Sierra Leone, with a total death toll of more than 4,500.

Ghana, which is still free of Ebola, has become the hub for an intensified international response to the crisis, with the U.N. Mission for Ebola Emergency Response based in Accra. Ghana is one of 14 West African counties seen as being at risk, and authorities have set up at least three Ebola isolation centers across the country in case there is an outbreak.

Boley, a 40-year-old Christian pastor, has been stranded for weeks. He is bored and often thinks of his babies, whom he barely knows.

“I have been trying to get back to Liberia but it’s very difficult,” he said. “This is tough for me. I am the man of the home and when I talk to my wife she says to me that I need to be there. But I can’t do anything for her.”