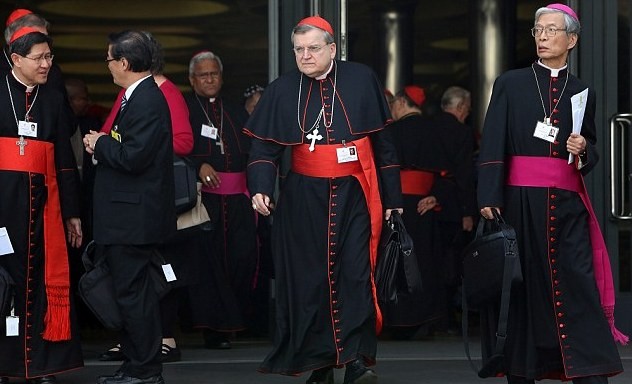 A day after signaling a warmer embrace of gays and lesbians and divorced Catholics, conservative cardinals hit back strongly Tuesday (Oct. 14), with one insisting that an abrupt-face on church teaching is “not what we are saying at all.”

After Monday’s release of a document with a softer tone on issues such as “welcoming homosexuals,” American Cardinal Raymond Burke and German Cardinal Gerhard Mueller complained the media was getting a biased view of the bishops’ debate.

“It seems to me that information is being manipulated in a way that gives comment to only one theory instead of faithfully reporting the various positions expressed,” Burke said in a full-page interview published in Italian by the conservative daily, Il Foglio.

“This worries me very much because a significant number of bishops do not accept the ideas of an opening, but few (people) know that.”

In a separate interview published Tuesday, Burke told the conservative U.S. outlet Catholic World Report that the bishops “cannot accept” any changes because they are not based in Scripture or church teaching.

Monday’s mid-point report was released Monday as the the nearly 200 bishops and lay delegates to the Synod on the Family called by Pope Francis broke into discussion groups.

The summary document, presented to the media by Hungarian Cardinal Peter Erdo, immediately provoked the fury of conservatives about how he and his colleagues were interpreting the spectrum of views aired on the synod floor.

In what looked like strenuous damage control, the Rev. Federico Lombardi, the Vatican’s chief spokesman, told a packed media conference Tuesday that this was a “working document, not a final document.”

South African Cardinal Wilfrid Napier told journalists the document had been misunderstood and that’s why it had caused “such an upset” among participants because the synod had not yet ended.

“The message has gone out, it is not what we are saying at all, ” Napier said of the media coverage. “Once it is out there there’s no way of retrieving it. It is not a true position. Whatever goes out after looks like damage control.”