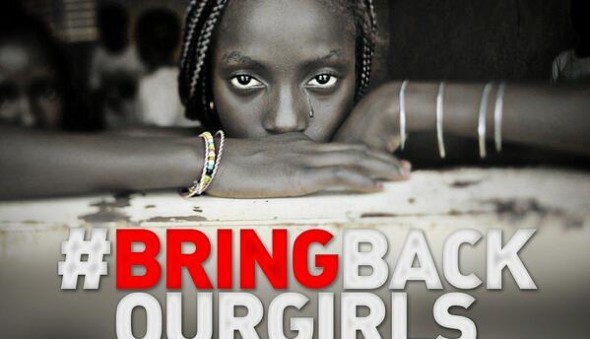 Friday 1st of November this year will mark  200 days, 6 months 20 days since the abduction of Chibok girls from a government secondary school, Borno State. The abduction of  was similar to the abduction of Aboke girls by LRA in 1996, Uganda. Initially after the abduction of the girls, the Nigerian government did not agree that the girls were abducted. A popular video circulated around which shows the unconstitutional but powerful appendage of power, the first lady carrying was a testimony of the disagreement of the first family. The government thought it was like any other issue that time will wade away just like Baga, Odi, Zaki Biam, Gwanin Gora massacres. Or they thought it was like Apo killing, the missing 20 billion scam, halliboturn scandal, or fuel subsidy scandal. They intended to keep quiet till the issue goes down with time.
Unfortunately for the government, the #Bring back our girls movement started the just five days after the abduction of the girls. Up to now they are there in Abuja marching. They never let the issue to be swept under the carpet. The movement attracted international attention. Over 30 million post and tweets was believed to have been posted in the social media in that month (April) when the girls were abducted. It was only Hadiza Bala and others that waka com in Abuja.
It is unfortunate that still the girls are not set free despite the resources spent to set them free. Over 40 billion dollars are spent each year from 2011 to date on security. This is not to talk of loans secured in the name of security.

Just recently, twice a plane was compounded in South Africa with over 15 million dollars in the name of security. Only God knows how many of its kind were successful. The participation of international forces and experts for over a month to locate and rescue the girls was also another unsuccessful effort that did not succeeded. Though that was a welcome development to the federal government since combine experts of America, China, UK, Israel, ECOWAS etc, then they surely found some respite and free from all blame.
After a month of negotiations, Stephen Devis came up with a horrific revelation that devastated all Nigerians. We are watching the development closely and waiting for answers. The impounded plane in South Africa also, we are waiting for answers. Nyako’s allegations also, we are waiting for answers. Etc.
The Bring back back our girls protesters have really tried for all the’ aluta’ out there. the campaign is rising and falling with time. After every 30 days, that is one month, the movement will rise because of additional month anniversary. The campaign’s strength was at all times low when Ebola came to Nigeria. The people, media and the government changed their focus from bringing back the girls to Ebola. The government tried it best and later, God in his will the virus was curtailed and subsequently eradicated from Nigeria.
About 10 days ago, a truce was said to have been entered between Nigerian government and Boko Haram. It is my hope that the truce be maintained and strengthened. It is also my hope and prayer that this fighting will stop totally soon. It is my hope and prayer that unity, peace and prosperity will come back to northern Nigeria and Nigeria as a whole.