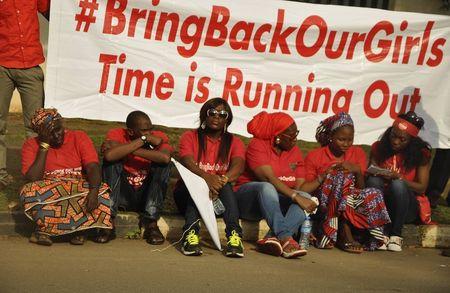 Protesters demanding the release of more than 200 Nigerian schoolgirls kidnapped six months ago by Islamist militants, demonstrated in front of the president’s home on Tuesday, urging the government to do more to free them. Around 60 people in red T-shirts that read “Bring Back Our Girls” marched to the residence of President Goodluck Jonathan in a leafy part of the Nigerian capital, which was guarded by more than 150 armed police. Scores of other protesters were prevented from joining the rally by other police lines at the top of the street.

“I want the president to try and bring back my friends,” said Rebecca Ishaku, who managed to escape from the clutches of the Boko Haram militants, she adds that, “I can’t even imagine what’s happening to them.”

A leader of the organisation of Chibok parents, Hosiah Lawan, struggled to hold back tears as he addressed the crowd, some of whom were also crying. He said government reassurances of an imminent rescue had originally given him hope. “That hope is now fading fast,” he said.

Jonathan sent his minister for lands and housing, Akon Eyakenyi, to meet the protesters, who were chanting “Bring back our girls now, and alive!” and waving banners. “The president will do something …. by the grace of God the girls will be brought back home,” Eyakenyi said. 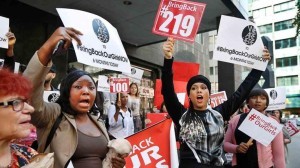