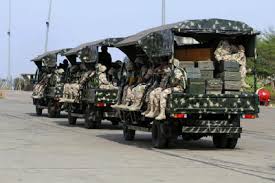 The recent massacre of innocent people by the Boko Haram sect in the North-east part of the country shows that the federal government is still far from winning the war on terror, writes Ojo M. Maduekwe

Many would agree, except the federal government, that Nigeria is in a state of war and Boko Haram appears to be winning the war on terror. The evidences remain public for everyone to see and reach a conclusion. The Borno State Governor, Alhaji Kashim Shettima, one of the North-east states under emergency rule and regularly attacked by the Boko Haram sect has reached his conclusion.

“What we are being confronted with is that we are in a state of war,” Shettima told reporters after a meeting at the State House Abuja, where he briefed President Goodluck Jonathan on the state of insecurity in Borno State. Shettima’s visit was necessitated by an attack by Boko Haram on the village of Izge, in Gwoza Local Government Area, where over 100 villagers were killed.
Few days after the Izge massacre, the Boko Haram Islamists attacked the community of Bama, in Borno State, killing another 47 villagers. Eyewitness said the sect had opened fire on a school and also attacked the palace of the traditional ruler of Borno, whose kingdom is said to be one of West Africa’s oldest medieval Islamic caliphates, partly burning it down.
Shettima believes that Boko Haram Islamists are “better armed and are better motivated” than the Nigerian military. A self-professed eternal optimist, the governor said given the present state of affairs, “it is absolutely impossible for us to defeat Boko Haram;” an indictment on the federal government that budgeted 1 trillion naira for the military, in the 2014 budget.

Shettima said there was an urgent need for the federal government to change strategy and “stop playing the ostrich; rise up to the challenges of the day and marshal all resources towards stopping the antics of Boko Haram.” There are experts who also believe that maybe the huge sums of security votes constantly being set aside for the terror war has not been well managed.

For a military that has undergone several reshufflings of its heads under one administration and the huge funds budgeted for it, many believe it is worrisome that the military remains largely reactive in its approach to the incessant attacks by the Boko Haram Islamists, failing to be proactive.
The Borno Concerned Women’s Forum (BCWF) contends that the federal government need to take proactive measures against the terrorists “instead of being reactive after attacks.”

Shettima, referring to Boko Haram attacks, said “Anybody who is following events in this country can attest to the fact that they have a very smooth sail in running over communities, killing people.”
Citing instances like the time they went to Konduga and held sway for over four hours before they left; also Kauri and Izge communities, he asked: “Have we ever succeeded in thwarting any of their plans?” Many times, the government troops have been reported arriving at the scene of the attacks hours after the terrorists had succeeded in their killings.
An instance was in September 2013 when the Boko Haram insurgents stormed Beneshiek community, blocking the highway, after attacking a military base at the outskirt of the town. THISDAY reported that “in the attack, no fewer than 100 people, mainly commuters and motorists, were slaughtered on the highway by the insurgents, a development that compelled incessant patrol on the road by military troops.”
In late January, 2014, THISDAY reported that gunmen suspected to be members of the Boko Haram Islamic sect killed about 70 persons in two separate attacks in Adamawa and Borno States.

“In one incident, some men armed with guns and explosives killed 18 people at a busy Catholic Church during a morning mass in Waga Chakawa village in Adamawa State. In the second incidence, the terrorists attacked a village in Borno State with explosives, killing 52 people and razing more than 300 homes.”

They want members of the National Assembly from Borno State to take actions that would compel the federal government to contribute to the wellbeing of the people of the state and support the efforts of the State governor in rehabilitating the victims of the Boko Haram insurgency. The federal government is said not to have shown any seriousness in supporting Boko Haram victims.

Recently, President Jonathan, in an unstated campaign, was in the South-west where he visited some select monarchs. He stopped in Lagos State to worship the General Overseer of the Redeemed Christian Church of God (RCCG), in one of the church branches in the state.

Speaking at the service, he said: “Christians and other religious groups who prayed for this country are the reason for the ‘relative’ peace that we enjoy in Nigeria.” But Nigerians have questioned where the peace is. They asked: is it in the North-east where the federal government keeps claiming to be winning the war on terror and yet the Boko Haram members continue on their rampaging massacre?

Where is the hope for a child who has lost all his family members from Boko Haram which raided an entire village and where is the hope for a young lady who’s been raped by the extremists, and now has a baby to take care of and is yet being stigmatised by the same society that’s supposed to accommodate her? What can prayers do for these people? Even getting justice for the crime committed against them cannot make up for their loss and sorrow.

African Director at the Human Rights Watch (HRW), Daniel Bekele said, “The killing and mutilation of ordinary Nigerians, the abduction and rape of women and girls, and the use of children for fighting are horrifying human rights violations.”
This is part of a report during a nine-day November 2013 visit to Kano and Maiduguri by the Human Rights Watch.

Among those interviewed, commanders of the Civilian Joint Task Force told HRW that they had rescued 26 abducted women and girls from a Boko Haram stronghold in Maiduguri.
“Some of the women and girls were pregnant; others had babies,” stated the report. A number of girls had been abducted while hawking wares on the street or working on farms in remote villages.

According to HRW, citing an activist, one of the 60 victims and witnesses, as well as medical personnel, members of local rights groups, Civilian Joint Task Force commanders, and government officials interviewed, “Many girls who were rescued or had escaped were sent off by their families to distant cities like Abuja and Lagos to avoid the stigma of rape or pregnancy outside of marriage.”

Also this year, the United States raised concern over the female students abducted recently from the Government Girls Senior Secondary School and Ashigar School of Business and Administrative Studies in Borno State by suspected members of the Boko Haram sect, calling on the Nigerian government to bring the perpetrators of these acts to justice.
In Nigeria’s war against terrorism, can prayers take the place of sophisticated weaponry, motivation of the army and proactive measures by the security agencies who are working at solving the terrorism riddle? For those who believe in it, is it enough in fighting Boko Haram? In a religiously obsessed society like Nigeria, where is the line drawn between faith and works?

Since the year began, there’s been hardly a day in the North-east without the Boko Haram sect carrying out one attack or the other. Even the Southern part of the country, assumed to be at peace, is feared would eventually fall under the yoke of terrorism if the extremists are not decisively checked.

In a video, Boko Haram leader, Abubakar Shekau, who was alleged by the federal government to have been killed from a gunshot wound by the Nigerian military threatened that in the coming days, the sect would shift its target to the oil refineries in the South-south, while also threatening to kill the Shehu of Borno, Abubakar Ibn Garbai Elkanemi and Emir of Kano, Ado Bayero.

Early last December, Shettima told a group of young people under the auspices of All Progressives Youths Forum, Borno State Chapter that due to the Boko Haram crisis and near destruction of its economy, “Borno has been taken backward by 50 years.”
It is believed that the entire country and not just Borno has been drawn back by the terrorist war. Imagine for a second, what the 1 trillion naira being budgeted for the military in 2014 would have done to develop other sectors if there wasn’t the need to fight terrorism?

The federal government, obviously, has to reconsider its current strategy in the fight against Boko Haram. Shettima, like many, believes that if the government could grant amnesty to the Niger Delta militants, then it should be willing to do same for repentant members of the Boko Haram sect. Maybe this is the time to play all cards if Nigeria must win the war on terror.

P.S This article was first published on thisdaylive.com. It’s been re-published here with the permission of the author.