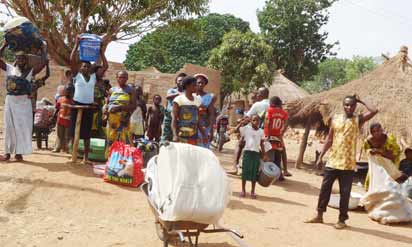 Tarhav Ukeyima 25, wakes up with a start. It’s 5.30am. He instinctively reaches for his wife, but his hand only touches the cold iron frame of the bed he is lying on. Suddenly his present circumstance comes rushing back to him. He is a “refuge” in his uncle’s house in Kastina-Ala Street, High Level, Makurdi. He is the only survivor of his immediate family of 4. His wife and 2 sons were brutally killed by the bullets of the Fulani militia who unleashed mayhem on his village, Tse-Usende, in Guma local Government Area, in a pre-dawn raid five days earlier. Tears stream down his face as the reality of his loss sets in. He has lost everything, his family, house and his livelihood; his farmland was razed in the attack and presently he can’t even venture back to his village. The Fulani militias are said to have set camp there.

Aper’s story as incredible as it seems is replicated among many individuals, families and households that constitute the front-line in the latest tsunami of violence tearing through rural Benue in an unimaginable proportion. These rural communities in Agatu, Guma, Gwer-West, and Makurdi Local Government Areas of Benue State have come under increasing brazen attacks by vicious bands of militia that leave death and destruction in their wake. Whole villages are overrun and inhabitants are forced to seek refuge in the Benue State capital; Makurdi, or other places considered safe.

As you approach Makurdi from Lafia; (from Daudu on the highway right into North Bank in Makurdi) a pitiable sight beholds you. Hundreds of displaced villagers are strewn on the roadside with all that is left of their worldly possessions. This cannot be Nigeria you wonder. However even in Makurdi palpable fear of a probable attack keeps the population on the edge. The other day, Wurukum Market, a bustling market in the heart of the town was deserted owing to rumours of an impending an attack by the militia.

Several writers have traced the causes of this war (Professor Hagher’s The Tiv-Fulani at War, As President Jonathan Helplessly Looks On, Ati-Kenneth’s Tiv-Fulani Crisis: Between Truth and Propaganda etc). An analysis of the reasons for the crises shows that they are as a result of a potpourri of social and economic factors with historical antecedents, but this write up will not delve into them. The paramount concern here is the drastic effect the continuing war in Benue State if not curbed will have on the food security of Nigeria and in extension its democracy in the nearest future.

For all the hype about the revenue derived from crude oil, over 40% of Nigeria’s gross domestic product (GDP) still comes from agriculture. This is because whereas the economy depends over 80% on the petroleum sector for public finance, the petroleum sector only caters for an insignificant number of people in terms of job creation or generally growing the economy. It rather serves as a conduit pipe for unbridled corruption and malfeasance, with tales of misappropriation and outright theft of public funds associated with its management. The festering issue of the “missing” billions of dollars is poignant.  Therefore, agriculture still remains the mainstay of the economy; providing for, as earlier noted, over 40% of its GDP.

According to Chinwe Ifejika Speranza, a researcher at the Centre for Development and Environment at the University of Bern, Switzerland, and Chinedum Nwajiuba, a professor of Agricultural Economics at the Imo State University Owerri, Nigeria has about 79 million hectares of arable land, of which 32 million hectares are cultivated. In spite of this abundant natural resource, Nigeria farm produce does not meet the consumption needs of her citizens. Nigerians largely depend on imported foods. Several factors are responsible for this. Over 90% of agricultural production in Nigeria is rain-fed, and with the irregular weather patterns food production is dwindling or at best irregular. Another factor is the growing population; Nigeria has perhaps the fastest growing population in the world. In fact at the present rate Nigeria is been projected to be the 3rd largest country in the world by 2050, third only to China and India. In addition to these, mostly subsistence farmers’ whose farming methods are not advanced account for 80% of all farm holdings. On the heels of all of these factors comes the most notorious; armed conflicts.

A good percentage of the most productive arable lands among those cultivated are situated in what are known as wetlands. Ojekunle Zaccheaus of the University of Agriculture, Abeokuta, Ogun State, in his seminal study of Nigeria wetlands titled, Multiple Utilizations of Wetlands for Sustainable Food and Watercycling Production in Nigeria, lists that of the Niger River; which is mangrove, and occupies 249,885 hectares, claiming 71.9% of Nigerian wetlands. The list also includes the Fresh wetlands also of Niger River and Benue River. The important fact here is that a whopping 56% of the local food consumed in the country is produced from the wetlands! This simply means that because the epicentre of the ongoing war is in the highly productive wetlands, if it is not curtailed the war could lead to a drastic fall in domestic food production, leading to food insecurity.

Food security according to the World Bank is a condition in which all people have access at all times to enough food of an adequate nutritional quality for a healthy and active life. The opposite of this condition is food insecurity. It is no secret that food insecurity is a major cause of violent conflicts. Brinkman and Hendrix in Food Insecurity and Violent Conflict: Causes, Consequences, and Addressing the Challenges, observe that “food insecurity is a threat and impact multiplier for violent conflict. It might not be a direct cause and rarely the only cause, but combined with other factors, for example in the political or economic spheres, it could be the factor that determines whether and when violent conflicts will erupt”.

Even though there is no empirical link to food insecurity as the ONLY cause for violent conflict several studies acknowledge it as a MAJOR cause. This is because the people most likely to participate in armed conflict – young men from rural areas with limited education and economic prospects – are likely to seek work in the agricultural sector. As that work dries up, fighting looks more attractive.

In Nigeria northeast region, the effects of the Boko Haram insurgency on food security and subsequent violence are writ large; according to Muhammed Namadi, the Borno State Farmers Association Chairman, “Many young and old farmers have been killed or forced to leave their farms”. An incisive consequence of this situation is captured by Ladipo Lasiss, Managing Director of Liasbi Mills an indigenous food processing company in Nigeria. Lassis in an interview with the Daily Independent says, “If the farmers don’t give out output, we don’t have anything. For instance, Boko Haram has stopped the flow of beans”.

Nigeria cannot afford a situation where another region’s farming activity is truncated due to any reason. As it stands, farming in the northeast has all but halted; if the north-central region travels that route then we will be in serious trouble. Hunger and joblessness among young people is a combustible cocktail that can be easily ignited especially with our pre-existing religious/tribal fault-lines and a dysfunctional political elite ready to exploit these fault-lines for selfish ends.

The imminence of this calamity is reinforced by the fact that there is a reported drop in the revenue been generated by Nigeria. This implies that there will be less money for most Nigerians to pay for food whose prices will likely increase due to a shortage in supply. The dwindling revenue will also limit money to be spent, as well, on the military resources needed to quell these conflicts. We are indeed in dire straits.

This is not a prophecy of doom. It is a wake up call to all of us to be more aware of the times and therefore contribute in whatever way we can to halt this slide to catastrophe. While doing this, our collective efforts might just be what will stop a hungry, angry, jobless, homeless, scared, and frustrated Tarhav Ukeyima from taking up arms and igniting the tinderbox that could consume us all.