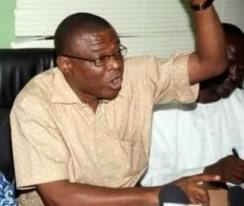 Because of the nature of the trend of some of the comments that have and are being made in recent times since the declaration by a significant section of the pro-democracy  civil society constituency to critically and robustly engage with the National Conference; and because we are standing before the court of history, it has become pertinent that one should make some public declaration in response to some the disingenuous smear campaigns that are being undertaken by those who for some reason or the other oppose engagement with the conference.

The tone of discourse being attempted by such persons in the recent past have been such that they have substituted ideological debate for blackmail, intellectual discourse for speculative reasoning, and political polemic for personal abuse. How can we seriously position ourselves as any credible alternative to the inept ruling class if we ourselves out perform them in the arena of the base and the trivial?

So some not so smart alec sits down somewhere and divides the N7bn proposed budget for the confab by the number of delegates [492], and comes up with the intellectually vacuous and disingenuous outcome that each of the delegates will be paid N12m for three months! How ridiculous can we get? For anyone with even the most basic experience in organising we know that simply because the budget for a town hall meeting for 100 persons is 100,000 Naira does not imply that each of the 1,000 participants will just be given 1,000 Naira each and the town hall meeting then ends!

By this illogical reasoning apparently each of the 492 delegates including the billionaires among them will simply be given a Ghana must go bag containing 12 million Naira each upon accreditation; and the conference then ends? It is an absurd manner of reasoning that can only stem from either genuine ignorance or deliberate mischief. By whatever account however there is an underlying poverty of the mind involved in this.

For me and those of us activists and active citizens who together with the organisations and historical coalitions that we belong to and lead have elected to engage critically and robustly with this conference we have been very clear about why we are engaging; we have said we acknowledge as a concession to the popular movement from a weak government and antagonistically divided ruling class; and because it is coming on the eve of a contentious general election and is holding in the symbolic year of a centenary of a contentious amalgamation; that for these reasons it represents a political opportunity to engage with the ruling class from a class perspective raising and building momentum around all of our historic demands.

We have released and been consistent with our program of action which includes a summary of the issues we shall raise and advance at the conference; as well as a process for building mass momentum around those issues. We have said the conference is for us a revolutionary tribune, a constitutional conference; and that we shall utilise it much as the Bolsheviks utilised the Tsarist Duma.

We shall appreciate a robust engagement with our program and platform, and not a smear campaign that is based on speculative illogical reasoning. For the avoidance of doubts, there are personal, political, ideological and organisational issues being raised here. And I intend to speak to each of them.

At the personal level some significant clarifications are necessary. In order to avoid a situation where 6 months down the line the perpetrators and perpetuators of this malicious N12 million tale would come out to say one was made by this money paid to delegates at the conference.

I am a Marxist and revolutionary activist – been such for more than 2 decades, and I have also been a civil society activist for more than 2 decades. And although I am a revolutionary Marxist I am of comfortable middle class origin. I share this origin and class placement with Marx, Engels, Lenin, Trotsky, Tony Cliff, and indeed with several millions of Marxists through history. I have worked in the development sector for 2 decades and have held the most senior positions in 3 international NGOs in Nigeria over the last 10 years, as well as the most senior positions in a reputable national NGO, ERA for 7 years previous to my sojourn in international NGOs. I have also been a development consultant running both national and international consultancies. I have worked in Nigeria, and worked in several other countries. As a development practitioner, I am in the top league of my area of specialisation and competence – conflict transformation, governance, advocacy and campaigning.

I live in a house in Abuja for which I pay no rent, because it is mine, built through mortgage; I collect rent from a property in PH which was built piecemeal over a 10 year period, from the salaries of my spouse` and myself. I am married to a wife from a comfortable middle class family; who has built up a stable career in the banking sector for nearly 2 decades. I have a daughter in boarding school that is not on scholarship. So yes I am comfortable. I drive a car and so does my wife, neither of which is a Tokunbo. I am not going to the conference for N12 million.

Now let us get back to the spurious issue of N12 million bribe or payment. Since the June 12 struggles of the 90s through to the January Uprising of 2012 I have been involved at the highest levels in our struggles; I could not be bribed then, I will not be bribed now; I did not sell out all through those periods, and I am not selling out now.

For the avoidance of doubt the real distraction is this speculative non-reason being spread around by those who oppose engagement with the conference, but cannot contend with the arguments, political, ideological and organisational of those who have chosen to engage. Instead of us having a robust conversation around how the conference and its processes might or might not be put to the service of our country, some people are trivialising important issues and processes, by telling the lie that some peoples’ participation has been purchased. How does this help to advance the argument for non participation or engagement?

This speculative distraction is a disservice to the struggle of our people. And enough is enough. We have a program that includes both content and process issues; engage us on this program, and stop the blackmail!