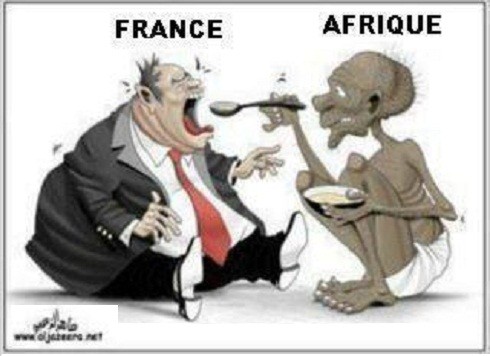 So this one is in keeping with the theme of Western exploitation. It’s about #France and its relationship with #Africa. Did you know that many countries in Africa pay a colonial tax to France up until this day? We are talking a minimum of 50 years since “independence” all round. But let’s be fair, the French have form in this kind of thing, so let’s go a little further back in time to see why it shouldn’t surprise anyone…

Prior to independence, St Dominique – the country that is now #Haiti – was France’s most profitable colony, thanks in no small part to its particularly brutal system of slavery. In 1791 the time was right as France was in revolution, so the slaves revolted, and in 1804, after defeating Napoleon’s armies, founded the world’s first black republic. Following Haiti’s independence, former French slave-owners submitted details of their losses to the French government, with line items for each of “their” slaves that had been “lost” with Haitian independence. In 1825, France, with warships at the ready, demanded Haiti compensate France for its loss of men, colony, and above all, profit. Faced with no help, the Haitians capitulated. In exchange for French recognition of Haiti as a sovereign republic, France demanded payment of 150 million francs (modern equivalent of $22 billion).

Haiti’s government was also forced to finance the debt through loans from a SINGLE French bank, which capitalised on its monopoly by charging Haiti with exorbitant interest rates and transaction fees. Haiti paid that money for the next 140 years. Note that as of 1825, slavery was already illegal internationally, and the emancipation proclamation happened in 1863. Till today, France has refused to refund the money stolen from Haiti, and has carried this attitude on to its dealings with its former African colonies.

The late leader of #Guinea, Sekou Toure, reached a decision in 1958 to get the French out of his country and opted for full independence. He told Charles de Gaulle, leader of France: “We have told you bluntly, Mr President, what the demands of the people are…We have one prime and essential need: our dignity. But there is no dignity without freedom … We prefer freedom in poverty to opulence in slavery.”

De Gaulle was furious, and in that fury, ordered a scorch earth policy for Guinea. All Frenchmen out of Guinea, and told them to take EVERYTHING with them, and DESTROY what could not be taken out of Guinea.

We are talking of schools, hospitals, cars, medicines, agricultural equipment, even toilets. They went as far as killing farm animals and burning or poisoning food stores. The purpose of this action was to send a clear message to all other colonies that the consequences for rejecting France would be very high.

As a result of this, Sekou Toure’s,”Nous preferons la liberte dans la pauvrete a l’opulence dans l’esclavage” sounded hollow to other French colonies in Africa. But they wanted “independence”, whatever that would mean, so the leader of #Togo, Sylvanus Olympio found an agreement that was acceptable to all sides in the talks. He proposed to, and the French agreed, to pay a debt to France for all the “benefits” that Togo had received from France during the 46 years of French colonization. France, in that agreement, was to estimate what this “colonial debt” cost, and the African country in question would repay it as a “merci” for France bringing civilisation to them. In Togo’s case, the amount estimated by France was so huge that Olympio knew there was no way they could pay. After independence, he attempted to replace the CFA with Togo’s own currency.

Three days after Togo started printing its new currency, Olympio was killed in a coup led by Gnassingbe Eyadema, who promptly installed Nicolas Grunitzky, a white boy as President. Grunitzky’s first action was to take Togo right back into the CFA zone. The same crap happened in #Mali, where Modibo Keita wanted to take Mali out of the CFA zone and closer to #Russia.

He was promptly kicked out of office in a coup led by Moussa Traore. Keita was lucky though, he slummed around in prison from 1968 until he died in 1977.

In 1966, Jean Bokassa in the #CentralAfricanRepublic conducted a coup against David Dacko. Dacko would become president again in 1979 and be removed in another coup in 1981. What was Dacko’s crime that he was removed twice in coups? He wanted to take the CAR out of the CFA (East) zone. He felt that being in CFA wasn’t helping CAR.

In #BurkinaFaso, Aboubacar Lamizana removed Maurice Yameogo from office for similar reasons, as did Mathieu Kerekou in #Benin who removed Hubert Maga.

Houphouet-Boigny was also suspected of (but never proven to) sponsoring the chaps who removed, and killed, Thomas Sankara in Burkina Faso. Those chaps are still in power till today

So, what was common to all of these coup-plotters? Were they great economists? No they were not. As stated, Kerekou, after five years in power became more socialist in outlook. For me personally, in an African context, socialism, (not communism!), is the way to go in order lift the large numbers we have in poverty out of it. More on that later.

The main thing that was common with Eyadema, Bokassa, Lamizana, Kerekou, was that they all served France militarily. To me, it is clear that they were taking orders.

Between 1963 and 2013, there were 67 coups in 26 African countries. 16 of those countries are Francophone, and the coups always happened after a policy change

So, what is this policy change that happens that suddenly means that the leader of a Francophone African country suddenly becomes “really bad” to his people?

This policy change, is the attempt to get out of the pacte colonial, the treaty that France has with these countries that ensures they remain slaves to France

As we speak, 14 African countries, are by this pacte colonial, obligated to put 85% of their foreign reserve into the Banque de France, directly under the French Ministry of Finance!

In other words, that “colonial debt” that Sylvanus Olympio agreed to in 1960 is still being paid. Those who obey, eg Houphouet-Boigny, are made very rich. Those who rebel, are removed in a coup

So how does this pacte colonial work? The pacte colonial has 11 components which all of its signatories must adhere to. And of course, they are in France’s favour:

First, they have to pay for the benefits of France colonization, ergo, they pay for infrastructure built by France during colonial times at a rate that France evaluated

Second, their foreign currency reserves are deposited in the Banque de France under a complex arrangement, and without oversight from the client states.

As part of this arrangement, 65% of the country’s foreign reserve is kept in a “savings account” by the French, with no recourse to ask exactly how much is being held.

Another 20% of the foreign reserve is paid back to France as, err, using a Nigerian bank euphemism, COT for the “pain” of the French managing your money for you.

The countries in question can only access the remaining 15% of their own foreign reserves in any given fiscal year, and if they need more, they have to borrow, from France!

The third component of the pacte colonial is that France has first right of refusal for any natural resource found in that country. This is the reason why Niger has to sell all of its uranium, at a very cheap rate, to France. Note that 77% of France’s electricity is nuclear. Where do you think the uranium comes from?

That’s the reason that French troops are quick to get on the ground in any African conflict that threatens France’s interests. It’s all about the money.

That’s the reason that the Ivory Coast is claiming the oil that’s been found in Ghana’s territorial waters, the oil will become, French. The fourth part of the pacte colonial is that ALL government contracts in those countries must be opened first to French companies. If the French don’t want, then #China can come…

The sixth component of the pacte colonial is that these countries are forced to use the CFA Franc as their currency. EVEN ater France moved to the Euro.

As a matter of fact, it was the move to the Euro that exposed the pacte colonial. Other European countries found out just how fat France was feeding from its former African colonies.

#Sweden, #Norway and #Denmark have on many occasions tried to get the pacte colonial ditched, all their attempts have failed because France makes free money from it each years.

Former French president, Chirac admitted as much when he said, in 2008, “Without Africa, France will slide down into the rank of a third [world] power”

The seventh part excludes the teaching of other languages in their schools aside from French. “Wir sind eine volke!” There’s no better way to keep a people mentally colonized.

Let’s put it this way, only 74 million people speak French as a first language. This policy limits access to the cross-fertilisation of ideas.

The eighth part is military: France has the exclusive right to train these countries’ soldiers, and supply their militaries. This is a particularly crafty part of it, because the troops are indoctrinated from conscript/recruit level, and the moment a leader starts having ideas, you guessed it, there’s a coup.

Think about it, all of the most recent coups in Africa (#SouthSudan wasn’t a coup, #Egypt doesn’t count), have been in Francophone countries AFTER a deal was reached with China.

The tenth component of the pacte colonial forbids these countries from entering into military alliances without French approval. This particular component explains why back in the 1990s, when ECOMOG was formed because of #Liberia’s civil war, only #Senegal sent troops from Francophone West Africa.

The Senegalese troops, 1500 of them were withdrawn after six months because oga didn’t like it. Can’t have them mixing with those corrupt Nigerian troops you see…This also explains why #Nigeria has had to seek French help in the #BokoHaram wana. Truth is, our multinational force wouldn’t have taken off without French approval.

Finally, these countries are obliged by the pacte colonial to side with France in the event of a war anywhere it may happen in the world. If for example, France had gotten involved in the #Iraq war, these chaps would have had to send troops on French request. Can’t run away from it.

Sadly, I do not see this psychopathic relationship being broken any time soon. There are only two countries in Africa that have the potential to do it. One of them, #SouthAfrica, is too far away from any Francophone country for it to be of immediate concern to them, and besides, they must deal with the SADC first.

The second, is Nigeria, and we are right in the middle of it. But two things have dogged us: bad, short-sighted leadership, and our own failing economy.

If our leadership, and I’m not just talking the current leadership, has any foresight, then we ought to know how to play the great power politics. But we don’t.

Second is that by our very size, we are a natural magnet for these countries. But that won’t happen until we get our act together in the real sense of the words.

Then, we need to genuinely fortify our military. There is no way we can play great power politics without having a strong military. Not possible.