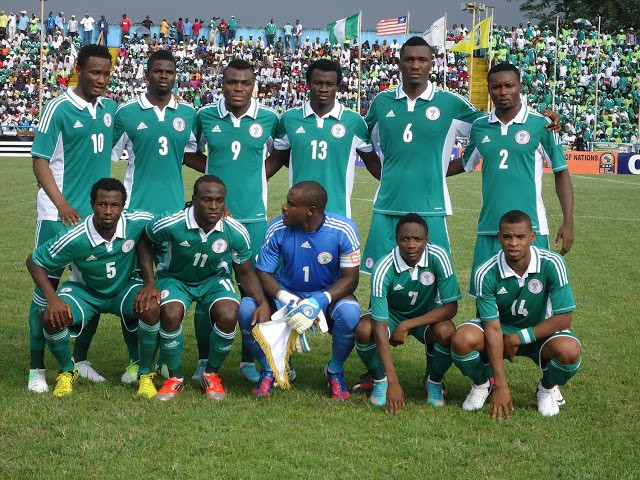 I had a chat with an American friend of mine a couple of days back concerning the state of African football and the teams that will be representing the continent at the World Cup in the summer. We discussed the Super Eagles, touching on a variety of issues ranging from the level of preparation, to the quality of players, the buzz surrounding the NFF and coaching staff, NPFL, an even the recently unveiled WC kit.

Randell, 36, is an International Business and Investment Analyst with a keen interest in Nigerian football. He first noticed the Super Eagles at the 1994 FIFA World Cup in the USA. How they took the world by storm with their skill, tenacity, power, and organisation, tearing opposition defences apart and scoring plenty of goals. He wondered how an African side could adopt and perfect such a modern and attractive brand of football, making it their own. He’s been supporting the team ever since.

However, he discovered it had become more or less a daunting task replicating the same feet; pointing out that Nigerian football is gradually reaching it’s twilight, and expressed extreme concern at the inability of previous teams in performing, especially in international competitions, sighting past disappointments, particularly the abysmal display in the last World Cup in South Africa. In retrospect he said “As huge a phenomenon football is in Nigeria, with a population of approximately well over 170million people, surely winning the World Cup shouldn’t be a difficult task”. Sadly, I had no comment. Not that I was in disagreement or had any doubts, but I became completely aware and overwhelmed by the truth and validity in that statement.

African football has improved tremendously. Now we see more African players feature in top European teams, playing in some of the most exciting leagues and prestigious competitions. So, I therefore refuse to accept the notion that Africa isn’t ready to dominate the world just yet.

For Nigeria, 2013 was an incredible year. Undoubtedly the stand out performers, reaching great heights accompanied by unprecedented achievements. Winners of the much coveted AFCON at senior level and conquerors of the world with the superbly talented U-17 team. Surely the future looks bright for the nation’s football.

In hind side, if we are to maintain the same level of consistency and dominance, even on a bigger stage, we must first explore the rudiments of modern football, embracing it’s application, and then accept to change the image of our football forever. This will certainly set us on the path of becoming one of the greatest footballing nations in history.

Identifying a suitable playing style is the first step. Adopting a philosophy is absolutely pivotal in recreating that desired image. Spain, current World and European champions, before now were regarded as great underachievers. Making numerous appearances in countless competitions, but having little or no impact. After an average performance at the 2006 World Cup in Germany, crashing out in the second round, it became apparent that the image of Spanish football needed a new face.

Luis Aragonés (Spanish team head coach at the time) decided it was time to employ a more pragmatic approach. A unique playing style with focus on complete monopoly and control of the ball. Hence the emergence of the famous ‘Tiki-Taka’, which evidently brought huge successes to the nation, and recognition all over the world. Now it has become a style adopted by many teams. With the mindset fixed on possession of the ball as the best form of defence and attack, dictating the outcome of any football match.

– Teaching the philosophy. The success of this ‘Style’ relies solely on the education of footballers particularly at grassroots level. Players must be taught and trained by the principles associated with the brand from a young age. Focus being on understanding the essence of playing that way, laying emphasis on the tactical and technical requirements embedded in the ‘Style’, positional responsibilities, player role, and team unity.

This must be evident in the culture of our learning. Academies play a vital role in the adoption and development of the philosophy.

– Maintaining a stand. Finally, it’s down to being associated with the ‘Brand’. We must be known for playing in that manner, at all levels. Senior, youth and even women’s football, the ‘Style’ must be adopted by all teams. Our National leagues also, with players, managers, and clubs imbibe it as the only way they know how. This must be our IMAGE everywhere we go.

Wining the World Cup has never been a question of rights, or size and strength of a nation, or race, but clearly by share determination and hard work. I strongly believe in the future of our football. I believe we’ve got the potential to dominate the world with our class, skill and finesse. We however, should not be bemoaned by the outcome of our performance in Brazil, but rather see it as a catalyst for optimum success in subsequent competitions. The onus is on us to make it right. We can certainly win the World Cup, but only when we pay attention to little details.