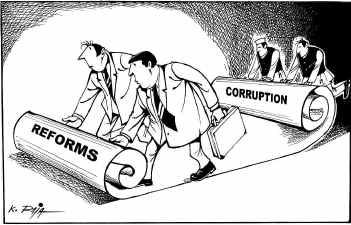 “One of the saddest lessons of history is this: If we’ve been bamboozled long enough, we tend to reject any evidence of the bamboozle. We’re no longer interested in finding out the truth. The bamboozle has captured us. It’s simply too painful to acknowledge, even to ourselves, that we’ve been taken. Once you give a charlatan power over you, you almost never get it back.”  – Carl Sagan

“…Politicians are not interested in empathizing with each other. They simply try to do as little as possible in the way of serving the public while building their reputation among their peers, amassing power and wealth that is unimaginable…” – Aaron B. Powell

Corruption is the biggest monster Nigeria still have to contend with. The war on corruption has become an uphill task for the government, but the reality is; how do you fight corruption with corrupt individuals?

We have witnessed what happens to anyone who is determined to stand against the monster called corruption. We have seen how sad it is when the ones with good intentions to ‘clean up’ end up being ‘flushed out’!

Fast forward to the recent ‘suspension’ of the CBN Governor by President Goodluck Jonathan, the President and the Presidency had been a bit uncomfortable with the outspoken (former) CBN Governor, Sanusi Lamido Sanusi, from the moment he revealed the unremitted oil revenue worth $20 billion by the NNPC to the media. SLS was a thorn on their flesh. He did what was not expected of him, according to the ‘Jonathanians’, SLS should be an errand boy for his boss and hence shouldn’t betray him. He should’ve kept quiet. They expected SLS to zip his mouth even if they continue to siphon the public funds.

I don’t agree with that, someone had to speak out. And thank God he did.

Mr. Sanusi’s decision to report the missing money cost him his job, there’s no doubt about that. But it’s worth it. He should be proud of himself and I salute his courage.

What about the other public servants we entrusted to serve us better? Have they proven themselves?
It’s quite disturbing, that, in a country where we have an intelligent, brilliant and highly respected person in Dr. Ngozi Okonjo-Iweala as the coordinating Minister of the Economy and Minister of Finance, she failed to reveal it to the public she swore to serve and she is equally backing the NNPC! How could she prove to Nigerians she is capable of coordinating the economy if monies as huge as $20 billion went missing under her watch? Her silence and subsequent denial and insistence of no wrong doing speaks volume. She is indeed, in my opinion, corrupt.

The administration of President Goodluck Jonathan has failed to deliver to the people what it promised. GEJ have been so indifferent to corrupt practices perpetrated by the members of his kitchen cabinet. How else could you explain a situation where a minister had to buy two bullet proof vehicles and nothing was done to reprimand the act? As I write this article, nothing has been done to investigate it. And later on, after several revelations about are questionable academic achievements and unending public uproar, she got sacked.

The sacking of the former Minister of Aviation, Stella Oduah, is never a solution to abolish corruption in our society, the public need to understand why she had to spend such a huge amount of money worth N255 million on just two cars! There was no statement of apologies to the Nigerian public and she was certainly not bothered either. That had been swept under the carpet.

This government has failed to provide security of lives and properties to its own people, many people have been killed since the insurgence of Boko Haram. Whatever security measures the federal government has put in place is certainly not working. Our government keep using the same approach and expecting a different result; that’s insanity. They seem comfortable as long as their own families are safe. But how safe, and for how long? The people are the most important and this government has failed them.

What’s the usefulness of any government that fails to protect its own people?  And funny enough, the same shameless people will soon be asking the people they have failed to protect to vote for them to continue in government.

GEJ also spends time paying visits to traditional and religious leaders, but I wonder if these leaders have the courage to tell him what the people they represent want, or are they just telling him to carry on as usual? He’d gone to so many Churches recently, which church is next? Our President is now a church inspector!

To the supporters of the administration of President Jonathan, I have this to say to you: it’s good to support a cause, but be careful, just because the system and actions of the government favours you today does not make it right for every Nigerians. Soon it might turn against you, and when it does, don’t cry foul. Don’t support blindly. Be wise.

The solution to corruption in our Nation is not to fight the corruption head-on, the people ‘at the top’ themselves are the corruption we are talking about here. The solution is to correct the ills in the system of governance at all levels. But if we have a weak head (as perceived by many), leading a lame Government, don’t expect anything different.