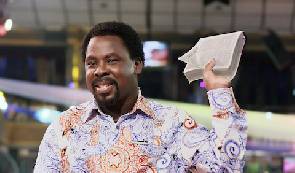 Revered Nigerian Prophet T.B. Joshua has engaged in an interactive session of questions and answers with his nearly 1,000,000 fans on Facebook, giving interesting insight into some contentious issues within Christianity.

The session was tagged #AskTBJoshua and dealt with issues ranging from disunity in the church, abortion after rape and the proficiency of pastor’s children to misbehave.

One reader surmised that pastors ‘don’t seem to be one’ today, asking Joshua what he felt was the cause. “We pastors, we are one,” Joshua, who is the founder of popular Christian television station Emmanuel TV, began. “However, a man may confess, ‘I am a pastor’ but not such in heart – intruders. We may bear the same name but we are not doing the same work.”

He further noted that the identifying feature of a true pastor was contentment, adding that the disunity evident within Christendom today results from this essential component being absent. “True pastors are content. When you are content, you will not compare yourself with others or measure yourself by yourself. Doing so causes disunity.”

Queried as to his doctrine on sin, Joshua said, “That you are a pastor does not mean you are not going to miss the mark or make a mistake,” evaluating that the mistakes of Christians actually intensified their zeal to serve God. “The mistakes of others keep them away from God but those of Christians strengthen their desire for God because they have a relationship with Jesus Christ already,” he stated.

Further questioned as to why some fanatical devotees said they were ‘following T.B. Joshua’ and the suitability of such statements, Joshua quickly denounced the notion, quoting Jesus’ words in John 14:6 and stating, “T.B. Joshua can only point the way but is not the way.”

Another fan asked whether Joshua had ever fallen sick, noting that they had never seen him publicly receive prayer or suspiciously miss a service. “That you are a pastor does not mean you are not going to be sick but our sickness is not like others. When sickness comes, we see the need of God the more,” he stated, citing the biblical example of Apostle Paul who had ‘a thorn in his flesh.’

A concerned reader asked whether the regular nightmares he experienced indicated he was not born again. Joshua quickly countered this assertion. “Anything close to Jesus receives attack,” he encouraged. “That you are regularly facing challenges does not make you an unbeliever. Don’t measure your Christian life by your situation.”

Another question probed what Joshua’s weakness was. “As a Christian, when you are weak, then you are strong,” he simply stated. “Not mine, not mine the strength!” The cleric also added, in answering a question about debt, that borrowing money does not amount to sin as long as “you have the desire to pay it back.”

Yet another question bordered on the difference between ‘Christians’ and ‘religious people’. “Religious people are without spirituality,” the pastor said. “We are only made Christians by living in the Word of God and by the Word living in us. True Christianity lies in the heart, in the purity of the heart.”

A further question revolved around a scenario where a pastor prays for a sick individual who does not receive healing. “True ministers must know God’s will on a matter – whether it is the time to do so or not because challenges can be used to strengthen our desire for God,” Joshua wrote. “s the will of God be done. Because of Christ, we pray.”

T.B. Joshua, who is known to be one of the most criticised pastors in Nigeria, was also asked about how he handled his persecution and the praise showered on him. “It is all about Jesus, not how I am treated or how I am doing. There can be no praise without rebuke.” He cited the need for gold to pass through a furnace as part of its refining process. “So also, human character must be tested in a real situation.”

Joshua added his voice to the growing concern raised within the Christian community to the manner in which pastor’s children tend to become rebellious and wayward. “It is all about upbringing,” he stated. “When we fail to train our children the way we train workers in the vineyard who are under us, they are bound to misbehave.”  Joshua stated that the children of pastors should see ‘Jesus as Father’ and their earthly father as ‘mentor’. “If we mentor them, we will bring the good out of them. If we father them, opposite is the case,” he concluded.

He equally added that committing abortion, even in a circumstance where the pregnancy is a result of rape, was sinful. He added that the background of many heroic figures in society could be traced to such unsavory circumstances.

T.B. Joshua, who made headlines recently for his prophecy about the missing Malaysian airline and the confession of a Boko Haram sect member in his church, is touted to be one of Africa’s 50 most influential individuals. His ministry, The Synagogue Church Of All Nations (SCOAN), attracts a huge number of foreign pilgrims and has been hailed for its impact on Nigerian tourism.

Ihechukwu Njoku is a freelance Nigerian journalist currently based in London, UK