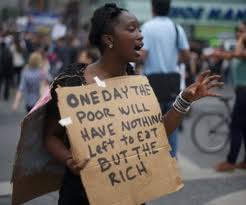 It was Governor Rotimi Ameachi who famously said Nigerians are too timid for a revolution to take place. During the 2012 fuel subsidy protest, Col. Abubakar Dangiwa Umar (Rtd) in his own wisdom said we should forget about the Arab spring in Nigeria. These words have been echoed almost everywhere. Off course, Nigeria is unique but thinking a revolution will never take place in Nigeria is pushing our uniqueness too far.

Chinua Achebe said in his last book that “the story Nigeria had of herself was that something like a military coup would never happen, Nigeria was too stable for that”. Today is not an era of military coup, it is the era of revolutions and we are still thinking it will “never happen”. I believe when military coups were happening left and right in Africa all we did then was say it won’t happen and today we are saying same thing about revolutions.

Let those in authority not be fooled, we are getting closer and closer to a Nigerian revolution. What is happening today in Nigeria is similar to what took place before the revolution of roses in Georgia. Prior to the Georgian revolution many party officials left the Citizens’ Union of Georgia (CUG) which was the ruling political party to form or join other political parties. This began the collapse of the political party that will go ahead to lose elections. Same thing is happening in the PDP today and unlike Georgia, people are designed-camping to join the mega party APC.

Early summer 2002, in Georgia there were indications that President Eduard Shevardnadze will not voluntarily relinquish power, so they began to strategize. Some NGOs were also involved like Open Society Institute (OSI), who sent some student activist to Serbia to learn about the  bulldozer revolution that happened in 2000. In Nigeria today, it is clear that President Goodluck Jonathan will not voluntarily relinquish power in 2015 election even if he losses. If he could recognise Governor Jonah Gyang who got minority votes as NGF chairman then you can imagine what will happen if he himself is defeated in 2015. I am not the only one blessed with wisdom, so I believe the opposition will already be thinking of a way like their counterpart in Georgia did in 2002.

The people of Georgia where already angry about so many things like corruption, state failure, economic mismanagement, poverty and finally electoral fraud. But what really gave way for the revolution was division among the elites. If we can learn anything from Georgia then there is no better time for a revolution than now. The senseless killings by Boko Haram in the Northeast, the killings by Fulani militias in Plateau, Taraba and Benue state. The attack on Enugu government house by armed men. The missing $20billion and other missing cash are just too numerous to mention. The 112 million Nigerians below poverty line and now fuel scarcity. All these are enough for us to be angry .

The people are getting more angry by the day that Pastor Tunde Bakare predicted that some thing will give way before 2015. If President Goodluck Jonathan dare give us a fraudulent election in other to remain in power then I foresee an uprise. This time around not only riots in the North but also well organised protests in the major cities of Abuja and Lagos and other small towns. Whether this Nigerian revolution will lead to better days like Georgia, that I don’t know. There is a possibility it will go the way of Ukraine whereby a part is threatening to secede or it can go the way of Egypt with constant unrest.

Some say a revolution will never be possible because of our multi-ethnicity. I believe we don’t need to take permission from all ethnic groups to execute a revolution, we need at most 1million people out of 160million Nigerians. Others say a revolution can never happen because we are too scared but if 2012 fuel subsidy protest thought me anything, it thought me that Nigerians are willing to rise only that they need those with guts to overcome the initial danger before joining. I know our politicians will only see this article as another music which is the main reason I believe this revolution will come. It was Malcolm-X who said “Usually when people are sad, they don’t do anything. They just cry over their condition. But when they get angry, they bring about a change”. May the coming change be for the good of Nigeria.

You can also interact with me on twitter @bumy04