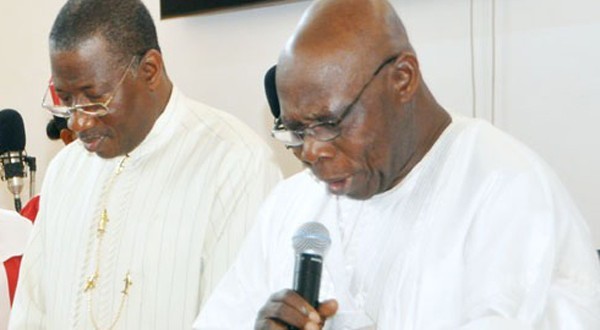 [highlight]Nigeria’s President Jonathan is coming under fire for the umpteenth time from his former political ally and ex President, Chief Olusegun Obasanjo.[/highlight]

Speaking to Bloomberg News, a London-based tabloid, yesterday, Obasanjo said during the 2011 election campaigns, Jonathan promised not to serve beyond a single term.

“President Jonathan said, not only once, twice, publicly, not only in Nigeria, outside Nigeria, that he would have one term, and said that to me,” Obasanjo said.

In the interview, Obasanjo challenged Jonathan to be a man of his words while reminding the president of the implication of not keeping one’s vows.

“One of the things that is very important in the life of any man or any person, is that he should be a man or person of his word,” Obasanjo said, adding that “If you decide that your word should not be taken seriously, that’s entirely up to you.”

Effort to reach the Special Adviser on Media and Publicity to the President, Dr. Reuben Abati, proved abortive as his phones were switched off.