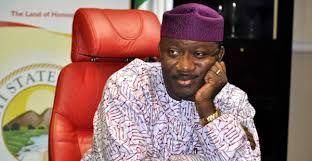 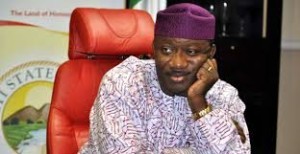 The Nigerian social media space is a volatile and very unpredictable community and those who saw N549,000 trending on the afternoon of Saturday 8th February would have had a hard time knowing where that figure came from. However, trending alongside this figure were the hashtag #JKFeedback and the official twitter handle of the Ekiti State Government @ekitistategov and keen observers were able to connect the dots.

#JKFeedback was an interactive session between Ekiti State Governor, John Kayode Fayemi, and prominent bloggers and activists from across Nigeria. Ogunyemi Bukola used the opportunity of the no-holds-barred discussion to ask the governor how much his salary is, and for the first time in Nigeria’s history, an elected public official declared his earnings. JKF, as he’s popularly called, said he earns N549,000 monthly without allowances as he lives in the government house and enjoys all the amenities for free.

That declaration threatened to overshadow other happenings at #JKFeedback, but what turned out to be the first truly independent assessment of any government by the Nigerian public was much more than that.

I got the email invite to participate in #JKFeedback from Funmi Ajala of the Digital Media Unit of Ekiti State. Taking bloggers and activists from across the country to Ekiti to assess JKF’s works initially sounded inappropriate. The people of Ekiti voted him, not us, and as such they should have the final say on whether their governor has performed well or not. The people of Ekiti do have the final say on this matter, but not the only say. Indeed, part of our job in Ekiti was to sample opinions of the people there on how well they think JKF has performed.

We got to Ikogosi Warm Spring and Resorts on Thursday, 6th February, and if anyone said you shouldn’t blow your own trumpet, Fayemi has not heard, or does not agree. Right there on the bed in each room were bags containing print materials detailing the achievements of his three and a half year old administration. On Friday, we went on a tour of Ekiti State, visiting 12 out of the 16 local governments in the state. We were taken to sites of completed and ongoing projects embarked upon by the administration, visiting schools, hospitals, dams and farms while assessing the quality of the roads and other infrastructure across the state. Saturday was the discussion proper, and the governor came three hours late and left earlier than he should have.

At his inauguration on October 16, 2010, Kayode Fayemi promised the people of Ekiti State to “democratize governance, modernize agriculture, improve on infrastructure, promote free and qualitative education towards the development of functional human capital, provide free health and social security to the disadvantaged sectors of the state, ensure industrial development, promote tourism and sustainable development and promote gender equality and women’s empowerment”. This 8-point agenda forms the basis of my assessment of his administration.

On the democratization of governance, two things stand out for me. One, Ekiti State senators pool their constituency project funds, N200 million each, to finance specific projects in the three senatorial districts of the state. N600 million every year for the past three years has ensured the execution of projects in tourism, agriculture and water provision, one of which is the provision of 1,700 hectares of irrigated land in conjunction with UNDP and FAO. I have not heard of any other state in Nigeria in which this is happening. Also, I am impressed by how diligently local governments have kept to the governor’s mandate of constructing at least 5km of roads every year. This has ensured the construction of at least 15km of local roads in each of the 16 local governments in Ekiti State since Fayemi became governor. Also, from our tour guide on Friday, to the commissioners who briefed us on Saturday, everyone had insight into the vision, and facts and figures on the achievements, of Fayemi’s administration.

On the modernization of agriculture, Fayemi said his vision is to “revive cocoa plantations to make Ekiti again a world leader in cocoa production; make agriculture contribute 50% of internally generated revenue; have 20,000 Ekiti youths trained and employed in mechanized agriculture by 2014.” I did not see a single cocoa plantation in Ekiti during my stay there, but records have it about 860,000 cocoa seedlings are being cultivated across the state. I visited cassava plantations and according to the Deputy Chief of Staff to the Governor, Egghead Odewale, the Youth Commercial Agriculture Development (YCAD) programme is in full swing but we were unable to get to any of the farm sites in which 250 young people under the scheme are employed. Agriculture equipment worth N57 million distributed to rice farmers, purchase to 20 tractors at N150 million, provision of micro-credit facilities to over 200 farmers are initiatives executed by the government.

On improvement of infrastructure, 902 federal, state and local government roads have been rehabilitated, each local government has constructed 5km of road every year for three years, and the state government has constructed about 1200km of roads since 2010. I should add that Ekiti State has arguably the best road network in Nigeria and in our tour of 12 local governments, we didn’t come across more than 3 bad patches of road while massive construction of bridges is ongoing in different parts of the state to replace the narrow and dangerous ones inherited by the Fayemi administration. Also, 100 transformers have been distributed to communities and N600 million have been goven to 176 communities to execute different projects.

On the promotion of free and qualitative education towards the development of functional human capital, Governor Kayode Fayemi’s administration has renovated all the 183 secondary schools in Ekiti State and has procured and distributed over 30,000 Samsung solar laptops to students and 18,000 to teachers of senior secondary schools in the state. Also, Ekiti has the best pay package for teachers in public service in Nigeria while those in the rural area get 20% of the basic salary more. Bursary funds for students of higher institutions of the state has been increased from N5,000 to N10,000.

On the provision of free health and social security, we were able to visit the site of the new general hospital in Ado-Ekiti, the Ekiti State University Teaching Hospital and the Cancer Diagnosis Centre built in honour of Mrs Funmilayo Olayinka, the late Deputy Governor of the State. About N100 million has been spent on medical assistance to needy patients, and another N38 million on indigent patients and physically challenged people.

On tourism and industrial development, I first visited Ikogosi Warm Spring in 2006 as a 200 Level OAU student before going back there last year and then over the weekend, and I am impressed by Kayode Fayemi’s vision and tenacity in turning what was essentially a bush into one of the most exotic holiday places in Nigeria at a cost of N1.5 billion. We were not opportuned to visit any industrial site in Ekiti State during our tour.

On the promotion of gender equality and women’s empowerment, it was refreshing to know that under Kayode Fayemi, Ekiti State has made strict laws against domestic abuse and violence against women, the state has halfway houses, a family court and other support systems for victims of rape and other forms of abuse, while the rights of widows and the girl child are protected. Ekiti State is also the first, and perhaps still the only, state in Nigeria to maintain a register for sex offenders.

However, much more needs to be done. I am unimpressed by the state of primary health facilities in Ekiti and I would have expected Governor Fayemi to issue a mandate to local governments in this regard as he did with roads. I have it on good authority that a single doctor oversees 6 primary health facilities in Erijiyan and Ikogosi, and that doctor is there on youth service. There are cracks in the walls of the Funmilayo Olayinka Cancer Centre which was opened in October last year, suggesting shoddy work by the contractor.

Also, Governor Fayemi was defiant on the effective execution of his laptop initiative, but as Opemipo Adebanjo noted, there is a school in Erijiyan where the laptops are gathering dust in the principal’s office and the teachers claim they weren’t trained on the use of these gadgets, and the students do not know how to use Microsoft Word.

In agriculture, the development of irrigation sites at Ero, Egbe and Itapaji dams should be given more attention. More needs to be done about the vision of making Ekiti one of the world’s leading producer of cocoa. Also, more attention should be given to the production of cash crops like oil palm and cashew through YCAD. This should then roll into the industrial development agenda through the establishment of processing plants for agricultural produce. There are only 6 women in the 29 member state executive council, in a state where women are the majority. This is totally unacceptable and I hope the governor makes good his promise to Rinsola Abiola on correcting the imbalance in his second term.

I am not swayed by Governor Fayemi’s attempt at turning my purely economic question on the disparity between the state’s IGR and monthly salary expenditure into an ideological battle between socialism and capitalism. While I commend his efforts at increasing IGR by more than 400%, from N140 million in 2011 to about N600 million in 2013, I am worried that he has failed to balance welfarism with economic sustainability. The sad truth is that Ekiti State cannot pay its workforce and finance its welfare and social security programmes until Abuja credits its account with the monthly N3 billion allocation. I hope Governor Fayemi’s efforts at attracting investments into the state through the provision of tax breaks and other initiatives as stated in the Agusto Report yield positive results over the next couple of years to enable the state attain financial independence.

Egghead Odewale wouldn’t agree with me that Kayode Fayemi’s administration has focused more on infrastructure than any other item on its 8 point agenda but that is the reality I observed. I will take the positives from that by saying Fayemi, by the provision of good roads, has opened up Ekiti for economic development, especially through agriculture and tourism.

I am impressed by how prudent and transparent Kayode Fayemi has been in the execution of projects in Ekiti State. Contracts are awarded at very modest and verifiable amounts, an example being the laptop project in which each unit costs about N60,000. Also, while I await the confirmation of his pay slip, I salute his bravery in openly declaring his salary and that of his commissioners. And I hope he has not joined the league of corrupt Nigerian politicians who eat their yam with palm oil from public pots. It would be heart-breaking for some of us who see him as an exemplary leader in the rot prevalent in Nigeria’s political space.

Kayode Fayemi has done well over the past three years and I urge the good people of Ekiti to give him a chance to continue the good work he has started by voting him as their governor for a second term. I urge them to be vigilant and hold him accountable at all times. As he goes about his campaign, visiting cities, towns and villages in the state, he will make promises and commitments, and they must hold him to these from day one of his second tenure.

My name is Ogunyemi Bukola (@zebbook), and I endorse John Kayode Fayemi for a second term as governor of Ekiti State.