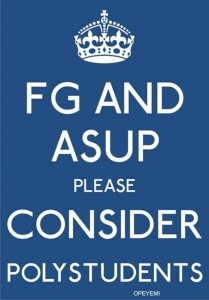 Story! Story! Story! It all began with a story. I was walking around HAFED Poly’s main library when a friend of mine reckoned that I shall come to a shade he’s seated under, mellowing out.

“Do you know that the ASUP are about to embark on strike next week” Shedrack questioned.

“What? What is the matter again?” I asked.

“Honestly, I don’t know. I just heard it in the hostel.” Shedrack retorted.

“Haba! It’s just an hearsay; how could they do that! Disregard this please, it may trigger their anger if well spread and haplessly embark on the strike.”

Shedrack laughed at my remark. And little had I thought about it since we parted.

It was on that fateful Friday morning (on 4th October, 2013) that I finally digested the news that ASUP re-embarked on its strike after the FG failed to honor its agreement. Before that they have been on strike from April till July, when they resumed after an agreement with the FG that it will fulfil their demands in two weeks, which is later reneged. For over months, after the promised two weeks, the FG didn’t either respond or apologize. That made the Union ran amok.

Putting on all their demands here will suck out words, time and space. But for clarity sake, I will focus on the major meetings, which was made public to us. I will start from where I had the experience of the strike, without prying into the previous episodic memory of the strike.

Back in April, the ASUP started their unsettling strike which as I earlier said, was as a result of FG deliberate inability to honor the agreement, which the Union immaturely held sacrosanct. The Union has no intention whatsoever to call off the horrid strike, but subsequently did so after a convincing intervention by the Joint Senate and House Representatives Committee on Education.

If it’s true that they’ve have had an agreement with the FG, which was later broken, the FG have done something they’re good at doing and the FG is 70% to blame. Why? Because they’re the leading body of all unions in Nigeria; which places them as an epitome. Again it’s unwholesome for any government- democratic or not- to break any agreement they have willingly signed with a union etc. This administration is very, very skilled at that; ASUU’s litany is an example!  And this helps to emphasizes that the FG should not be trusted in any affair.

Also, it’ll be unfair to put all the censure on the FG and forget to inscribe ASUP as the secondary culprit. Even if it’s true that they have signed the agreement and the FG failed, deliberately, to comply with the terms therein, they should have considered how the less-privileged Poly students will suffer if they’re to embark. What they ought to have done was to “warn” the FG, make their outcry public (to let the country know) and finally resume, if necessary. But sadly ASUP as callous as they have been, they just re-embarked on the strike without preliminary action. That divides the blame for the two egoistic parties.

There were, about 2, meetings between the FG and the ASUP (though sometimes represented) to resolve the strike issues, but none of these “tea sipping” encounter brought a positive outcome. The first meeting is not directly with the ASUP main body; Supervising Minister of Education, Nyesom Wike met with the Committee of Pro-Chancellors of Federal Polytechnics where he urged them to intervene in the “crisis” and affirmed that the FG had met over 80% of the Union’s demands. We haven’t received any beacon of hope and they didn’t bother to re-sit with the ASUP; they left the agreement papers in abeyance. This is Nigeria’s (GEJ’s) style. They’ll meet with a so-so union or association, promise this-and-that but as soon as the meeting is over, they’ll put the case under table, forget it until pressure is applied in them. Take ASUU’s strike as an example: after series of promises, intimidations and threats, the ASUU remained adamant about their stance on their destructive strike until their demands are finally met….OK, God is watching and He’s never asleep.

The struggle continues. Everyone remained silent until January when the FG met ASUP to find a way out. The meeting “ended in a deadlock” as both parties went unsatisfied. The FG, again, promised ASUP that if they resume work, the FG will meet four out of their thirteen demands. Four out of thirteen! Why four? The FG knows. In a nutshell, the meeting ended up achieving nothing; there was also a mild drama which most of us accustomed to the media heard about. ASUP went away, vexed. ASUP national chairman, Chibuzor, told journalists that they’ll hold a NEC meeting in two weeks and that was on the day before yesterday, Wednesday. It was finally announced that the ASUP strike will continue because at their NEC meeting, they resolved to reject the offer placed before them by the FG in their January rowdy meeting. The offer was that they’ll resume and four of their demands will be met in March. Once bitten twice shy, ASUP are not that foolish to believe them again.

I’ve got some questions for ASUP members (forgetting about the FG) : where are your children studying? If they your children are studying in our polytechnics, will you prolong this strike to this extent- or even think of embarking on it? How happy or sad are you to see poor children graduating from the polytechnics? Why can’t you sacrifice your “unnecessary” demands for the good of others?

We are waiting for what will transpire.