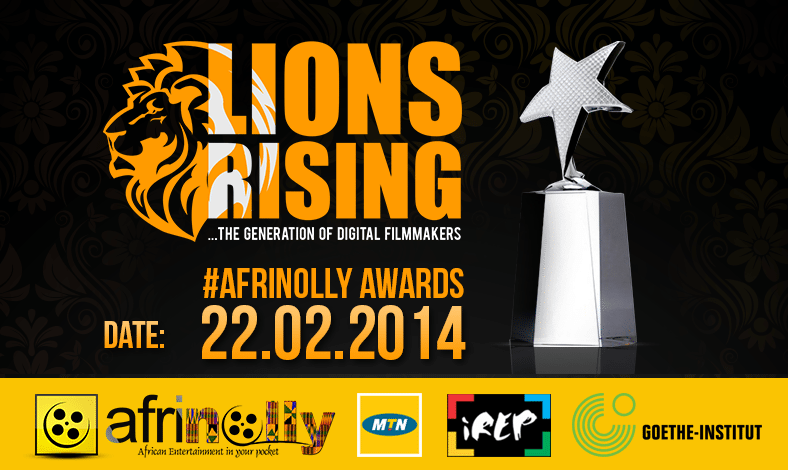 Themed “Lions Rising” the award presentation ceremony will be held in Lagos, Nigeria on Saturday 22nd February, 2014. The invite only event to celebrate the Generation of Digital Film Makers in Africa would have the introduction of some individual awards, namely the Best Cinematography, Best Picture, Best Use of Animation, Best Performance and most notably the ‘Komla Dumor Award for Storytelling’ in memorial of one of the Competition judges.

With over 400 entries were received from African filmmakers from 16 countries by the deadline of November 30, 2013. After three months and a competitive process, which deployed top of the range technological platforms involving online master classes, an international panel of judges and voting procedures, winners were announced. Check out the winning videos at http://afrinollyshortfilmcompetition.com/winners/

Other finalists who would be attending the event would receive an honorable mention. “Lions Rising is a reminder to all that there is an emerging new generation of digital filmmakers across Africa. Like Lions they move in groups and collaborate in more ways than others.” Chike Maduegbuna CEO of FansConnectOnline Limited the company who developed the Afrinolly app across various operating systems.

Speaking on the initiative, the Chief Marketing Officer, MTN Nigeria, Larry Annetts, explained that the company will continue to empower Africans and give them the platform to unleash their talents. In his words: “we are happy to discover another set of talent across the continent. As part of our corporate social responsibility, we will continue to discover, develop and empower people with aptitude through our various programmes geared towards enriching the lives of Africans and the world at large.”

The Afrinolly Short Film Competition is an initiative of the developers of Afrinolly mobile app. The Competition was supported by MTN, Cote Ouest Audiovisuel, IREP, Goethe Institut. Media partners include EbonyLife TV, Beat 99.9FM and BellaNaija.