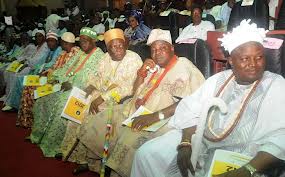 A couple of days ago, I took part in what amounted to a technological miracle. It was a conference by telephone by Yoruba intellectuals from virtually all countries of the world. We were meeting under the auspices of a Yoruba think-tank organization with members all over the globe. Participants in this meeting were located in the deepest south of the world (in Australia and New Zealand), in countries across Asia, Africa, Europe and the Americas, all the way as far north as Canada in North America and Norway and Russia in northern Europe. And we were meeting to discuss the all-important subject of the well-being and future of the Yoruba nation in Nigeria. Believe me, it was awesome hearing speaker after speaker, each an eminent scholar or professional, separated by tens of thousands of miles across the face of the earth.

In a way that is impossible for most Yoruba people at home, and for most Nigerians, to imagine, the Yoruba nation, by investing heavily in education for many decades, has transformed itself into a formidable global force. About a year ago, I stumbled upon a website of one of America’s ivy-league universities where it is written in bold type: “The Yoruba of West Africa are one of the most travelled peoples on earth. Their language and blood-type show up almost everywhere on the globe”. There must be very few countries in the wider world in which highly educated Yoruba men or women do not occupy important positions in academia, government service, or the professions. Increasingly in due course, all this global influence is sure to impact the fortunes of the Yoruba nation and the affairs of Nigeria in mighty ways.

The global tele-conference went on for hours and explored many subjects at very profound levels. I am not authorized to make such things public. I cannot even possibly do it in any article of any length. But there are some things that I can skim from the surface – and those I will touch now, to satisfy my irrepressible urge to communicate with my people.

First, it was emphasized that it is crucial that we Yoruba people must hold dear the shining treasures of our political culture, even in the jungle and wild storm that Nigeria has become. The temptation is strong for our leading public figures to go chasing and catching the trash and scum from the confused debris, but they must resist the temptation – if the Yoruba nation is to fulfill its destiny in the world. For instance, all strata of the Yoruba nation must make very clear our unyielding attachment to government based on the power and consent of the people, government that decently respects the will of the people – because this is a strong pillar of our political culture, and was so for over a thousand years before we became part of Nigeria. That means that there are many things that are strong features of the Nigerian political jungle, but that we Yoruba must denounce and reject in very clear terms.

One example is that we must make it clear that we do not endorse military coups as a means of addressing the failings of a democratically elected government, and that we will never again accept to live under any military regime in Nigeria. Faint indications in Gen. Olusegun Obasanjo’s recent letter to President Jonathan that a military intervention against President Jonathan might be under consideration in some quarters are against the collective will and interest of the Yoruba nation in Nigeria. We are conversant with the weaknesses of President Jonathan’s government; we also know that he has some distaste for us Yoruba people – apparently, partly because of some inexplicable ethnic animosity, and partly because we have been too freedom-loving to succumb to, and let our state governments be controlled by, his monstrous party, the PDP. In spite of all these, we must be strong and steadfast in rejecting any attempt by any group to terminate his presidency, or any future government of Nigeria, by a coup or any kind of violent force. Some of our leading politicians are part of a movement working now to create a new political party that aims to push the PDP out of power. Others among our politicians are working against this emerging political party. Those kinds of open democratic processes are harmonious with our political tradition; hideous plotting in the dark to change government by force is, on the basis of our political culture, an outrage and a very serious crime – and we must make that absolutely clear to the rest of Nigeria.

We must also make it clear to Nigeria that we are now much more determined to uphold and show our rejection of electoral fraud – the heinous disease that has been periodically bringing disaster upon Nigeria since the 1964 federal elections. The source of this Nigerian disease is that the people who control the powers of the federal government have since independence assumed that it is their prerogative to dictate, by fraudulent means if necessary, the outcomes of elections to the federal government, as well as elections to state and local governments, in all parts of Nigeria. In the context of that disruptive assumption, federal agencies connected with elections – the electoral commission, the electoral appeal courts, and the Nigeria Police – have usually operated like invading armies in those parts of Nigeria where the people show some determination to elect their governors and representatives freely. The Yoruba states of Nigeria have always been the foremost of the areas so invaded by federal agencies at elections. And young people of the Yoruba nation have again and again stood up stoutly against the invasion, and since independence, countless thousands of these youths have given their lives in the fight. From October 1965 to January 1966, hundreds of these youths were killed by Nigerian law-enforcement agencies in all parts of the Western Region. In 1983, when falsified results were announced by the federal electoral authorities for the gubernatorial election in Ondo State and Ondo State youths arose to resist the fraud, tens of them were killed by police bullets in the streets. After the gubernatorial election in Osun State in 2007, the morgue in one large hospital in the state was reported to be holding tens of unidentified corpses – all of young men who had stood up against the electoral fraud and had been killed in the process. Very stubborn litigation fights in the courts followed the 2003 and 2007 elections in the Yoruba states, resulting in most cases in the throwing out of the official election results.

In short, we Yoruba, being for about one-thousand years accustomed to selecting our rulers, are too culturally attached to free and fair elections to tolerate electoral frauds. At the forthcoming national conference, the Nigerian federation must be so restructured that Nigerians in various states of Nigeria will be able to elect their governments freely without having to wrestle with any invading federal agencies. This is part of the reasons why we Yoruba people strongly support the calling of a national conference. But we will also look out sharp, and powerfully defend our electoral freedom, in the state elections that are due to come in 2014, before the national conference completes business.

We Yoruba nation have a lot to contribute to saving Nigeria from the collapse that now threatens Nigeria. And we fully accept the duty of cooperating with the other nationalities of Nigeria to save and build Nigeria into a stable, peaceful, progressive and prosperous country. But to be able to put forth our best contribution, we must hold loyally and uncompromisingly to the best and most constructive attributes of our own political culture. For our wobbly and stumbling Nigeria to stabilize and survive, all Nigerian peoples who have constructive cultural assets to give must stand strong and give.We must stand firm on our good principles; surrendering to those who desire to preserve the corrupt tendencies and practices that have been destroying Nigeria is not service but betrayal.