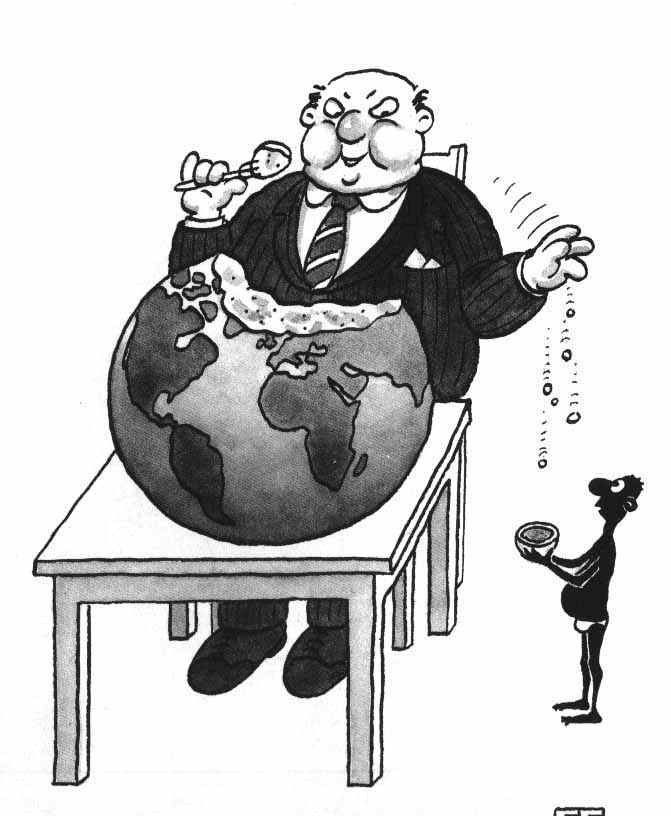 On January 1st, Opalaba called to wish me a Happy New Year and threw in a riddle for me to solve. Mimicking the Jeopardy game, which he adores because it is a veritable workout for the brain, my friend’s riddle goes thus: “Category: Being. This being was created by greed; it was nurtured in greed; it matured in greed; and at hundred, it is being consumed and paralysed by greed.” When I feigned ignorance, Opalaba was furious. “What else do you know?” he asked. This is just such a simple puzzle.

My friend went on to provide an answer to his invented puzzle. It was imperial greed that created the country named Nigeria. It was imperial greed that nurtured it and ensured that it had a political structure that was consistent with imperial interest. The transfer of power to indigenes didn’t change the motivation of greed; it cemented it. For indigenous greed was as potent as imperial greed. And indigenes appeared more masterful than foreigners in the matter of greed. So it was that greed determined the fate of the first republic before the soldiers tasted the forbidden fruit and had their eyes open to the immense possibilities of individual appropriation of the riches of the nation. And now it is the same greed that has consumed the nation and threatens its demise.

Though Opalaba can be dramatic, he surely knows how to hit the proverbial nail on the head. Not given to the language of diplomacy, my friend does not always appear courteous. And so, he went on to invite “a plague on all their houses”, finding none worthy of national accolade for exemplary statesmanship. “You may have something to gain with your soft and sweet talk. I don’t; and so I can say it as I see it. You must stop this self-deception. No one is in the business of politics for the sake of the good of the nation. If not, this country would be different after a hundred years of forced marriage and fifty plus years of flag independence. Or why is it that the whole idea of restructuring the polity for the purpose of effective functioning has been so controversial? Does it mean that the political class doesn’t see that what we have isn’t working?”

“Go back to the origin, the beginning of the being of this artifice. I have read over the five hundred plus pages of The Dual Mandate of Sir Frederick Lugard. And in my humble opinion, it’s only the most simplistic reading of that sickening material that would consider the creation of this country as due to anything but imperial greed. An act of God? Oh, please! I am reminded of the little poem that we were taught back in the elementary school in those days. The lines that stuck with me are the most relevant for my purpose here:

My early exposure to this powerful denunciation of the idea of attributing every occurrence—whether explicable in other ways or inexplicable—to God has been a liberating force. I am therefore suspicious of fatalistic reasoning because it paralyses thought and practice.

As Lugard made clearin his Dual Mandate, the British captured different nations, amalgamated them and held on to the country so created, “because it is the genius of our race to colonise, to trade, and to govern. The task in which England is engaged in the tropics—alike in Africa and in the East—has become part of her tradition, and she has ever given of her best in the cause of liberty and civilisation.” But it is not just fidelity to tradition. It also had to do with prudence and profit. “Europe benefitted by the wonderful increase in the amenities of life for the mass of her people which followed the opening up of Africa at the end of the nineteenth century. Africa benefited by the influx of manufactured goods, and the substitution of law and order for the methods of barbarism.” That, in short, was the dual mandate.

We can raise the question whether the dual mandate has been fulfilled. We can ask whether equal benefits accrued to Britain and Nigeria. We can ask whether the interest of each of the entities that were forced to become one country was equally served. As important as these questions are, however, they are not my focus. For one thing, they are of tangential interest to the question that we must address, which is “what is the way forward now? In response to critics in his own time, Lugard insisted that the colonies benefitted as much as Britain because they were introduced to the art of good governance and the practice of liberty. Did Britain leave Nigeria with the art of good governance? Did she leave a political structure that was meant to withstand the test of time?

In an important piece on the amalgamation of Nigeria, Chief Richard Akinjide, a Minister in the Balewa administration during the First Republic, made two important observations. First is what we all know, that Lugard came and operated in the business interest of his country and the amalgamation of the North and South of Nigeria was crucial for that interest. Chief Akinjide then made an important point, which can be glossed over but is worthy of our attention especially at this point in time. Lugard did not amalgamate the people of Nigeria. He only amalgamated the administrations of the North and South. His focus was to streamline the administration for effectiveness. He indeed ensured that the Southerners did not have access to the North. Hence the seclusion of the North until independence. We have managed to continue this tradition of segregation until today.

The second point that Chief Akinjide made was that Lugard ensured that he fashioned a political structure for his invented country that conformed to the British model. “In the British structure, England has permanent majority in the House of Commons. There was no way Wales can ever dominate England neither can Scotland dominate Britain….They would allow a Scottish to become Prime Minster. They would allow a Welsh man to become Prime Minister in London but the fact remains that the actual power is rested in England…That was what Lugard created in Nigeria, a permanent majority for the North.”

The clamour for restructuring must be seen in the context of the obvious malfunctioning of the structure that was created and the fact that the numerous conferences that have been initiated hardly addressed this question. The greed that motivated the invention of this artifice has continued to motivate its operation even in the hands of indigenes that ought to be motivated by the good of the country. Even if we assume that the amalgamation of the country was an act of God, the question remains if the actions of leaders have been consistent with that assumption.