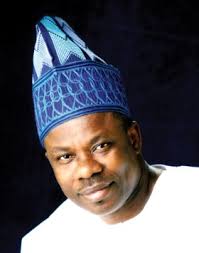 Some years ago whenever I travelled to Abeokuta, the Ogun State capital, I often wondered what the bold inscription‘SIA’ on huge billboards on the city’s major roads of a politician with a unique native cap on his head stood for. Was SIA some strange word in ‘Ijegba’ dialect? (apologies to our own W.S.) I later learnt that SIA is the acronym for Senator Ibikunle Amosun, the man who has charted an interesting trajectory to the governorship of the Gateway State.

I have over the years found the politics of Senator Ibikunle Amosun quite intriguing. His dexterous politics appears wrapped in a riddle, encapsulated in a puzzle and encased in an enigma. His impossible to ignore trademark cap is fashioned after that of the late Chief MKO Abiola. His personal philosophy is said to reflect the late business mogul’s philanthropic outlook. Senator Amosun’s political philosophy can be a study in a baffling eclecticism.

Was it just a case of seeking power for its own sake? Did the political platform and its ideology matter to Senator Amosun? Did he have the ideological clarity of a Dr. Kayode Fayemi or the passionate doctrinal fervour of an Engineer Rauf Aregbesola? Listening to him speak at a book launch in Lagos last year, Senator Amosun came across as a detached technocrat with a dispassionately clinical mind. Ever since his election, I have thus watched his politics and governance style carefully.

For instance, Dr Fayemi, the highly intellectual and administratively astute governor of Ekiti State makes a strikingly insightful distinction between what he describes as the trickle down economic policies of the PDP based on the doctrinal neo-liberal mind-set of the international financial institutions that have disempowered the majority of Nigerians and the emphasis on a grassroots model of development that prioritises among others job creation, provision of social services and rapid infrastructure characteristic of progressive parties.

In his own personal political credo, Senator Amosun though stresses his social welfarist credentials but places premium on the pivotal role of the private sector in driving development while government has “the responsibility to provide the enabling environment to achieve sustainable economic growth and social development”.

Two and a half years after his assumption of office, anyone who visits Ogun State can readily see that Amosun’s progressive credentials and compassionate social conscience are beyond dispute. You must see to believe. Something stupendous in terms of developmental strides is happening across Ogun State under Amosun. Yes, there is an on-going developmental renaissance throughout the South West including Edo State. But Amosun’s frenetic transformation in Ogun is phenomenal. The man means business!

Amosun has so much to show in every area of his 5-point Agenda – Mission to Rebuild Ogun State. These are Affordable and Qualitative Education, Efficient Health Care Delivery, Agricultural Production and Industrialisation, Affordable Housing and Urban Renewal as well as Rural and Infrastructural Development/Employment Generation. But it is in the sphere of infrastructure renewal and expansion, particularly what I call the roads revolution that Amosun has scored an amazing distinction thus far.

When some months ago I visited Abeokuta, I was initially irritated at the serious traffic snarls on many roads. It was later I discovered that this was due largely to the sheer magnitude of road construction going on throughout the city. In Amosun’s first year, he had delivered the magnificent Ita-Eko-Sokori-Totoro road and flyover at Ibara Roundabout in Abeokuta, the first of its kind in the state.

To usher in this year, the Amosun administration organised an all- night event under the newly constructed Ijebu-Ode flyover. On the occasion, the Governor assured the people of Ijebu-Ode that all the over-head bridges under construction in the area will be completed before the third anniversary of his administration.

Is it any wonder then that speaking on December 24, 2013, during the Ogun State Christmas Carol at the June 12 Cultural Centre in Abeokuta former President Olusegun Obasanjo had lavish words of commendation for the Amosun administration? According to the no-nonsense former President “Things are getting better everyday, getting better every time in Ogun. When I was talking of roads in Abeokuta, they said I haven’t been to Ijebu Ode and Sagamu. On getting to Ijebu Ode, I even saw if not better bridges than that of Abeokuta being constructed. What about the ones in Ilara and Ayetoro?…When I passed through Sango-Abeokuta road, I asked who is building this factory, but it is a school being built by the government”.

Well, that is the testimony of none other than OBJ. of course, there are serious challenges attendant on the kind of massive development being undertaken by Amosun. First is the possibility of resource over-stretch, which may lead to cash-strapped projects being abandoned midway. But then Amosun is himself a Chartered Accountant and astute financial engineer. He also has a highly competent team that should be able to get its planning right. Again, this level of roads construction and expansion will necessarily entail large scale demolition of obstructive structures with unsavoury political consequences. The Amosun administration must have the political acumen to manage this challenge with dexterity and subtlety.

Furthermore, when an administration expends so much resources on developmental projects, it will necessarily have less to expend on the wants and needs of the political class. Yet, these are the political foot soldiers so critical to winning elections. This is perhaps why Amosun has shown personal example by reducing the salaries of political office holders. Yet, he must have the political wisdom to maintain a delicate balance between a passion for technocratic change and the sensitivities of the political class that worked for his election and are critical to his electoral future.

On the basis of the foregoing, this column takes the liberty of conferring on SIA the honour: Grand Commander of Infrastructure Renewal (GCIR). But a word of caution is not out of place. It is not how well you start that matters, but how well you finish. Amosun’s immediate predecessor, Otunba Gbenga Daniel, started brilliantly but ended with a legacy in ruins. Amosun may listen but must stubbornly refuse to dance to the seductive but destructive music of sycophants. For SIA, the GCIR, it is surely morning yet on creation day.