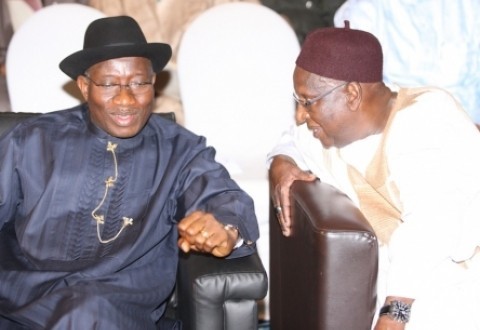 He reportedly rushed down to the Presidential Villa to beg President Goodluck Jonathan to save him from being disgraced out of office.

He assured the President repeatedly that he would reconcile with the aggrieved members of the National Working Committee (NWC) and other leaders of the party, it was learnt.

The President reportedly met with Board of Trustees Chairman Chief Tony Anenih and other leaders on Tukur’s offer.

There were strong indications that the President and members of the National Caucus might give Tukur a second chance.

Investigation by our correspondent revealed that upon reaching the Presidential Villa, a distraught Tukur attempted to kneel down for the President, but it was resisted by Jonathan.

The President said he would not allow Tukur to kneel down for him because he has respect for old age.

It was learnt that Tukur then opened up on why he should not be forced out of office.

A source from the Northeast said: “Tukur repeatedly said, ‘Mr. President, I beg you in the name of God, do not disgrace me out of office.’

“He repeated how loyal he had been to the President and why his reform programmes was misunderstood by governors and members of the National Working Committee (NWC).

“Tukur assured the President that he would make peace with all aggrieved governors, NWC members and leaders of the party.”

Responding to a question, the source said Tukur asked the President to allow the party to give him “some time” to reunite everyone in the party.

The source added: “At a point, Tukur held on to the President to ‘please help me beg all these people who are against me, I do not want to be disgraced. I think there is an age gap; these people do not understand me.’ The development made the President emotional.”

The President, it was learnt, invited some leaders of the party to hear Tukur’s penitence.

Jonathan was said to have told Tukur: “I have no problem with you as long as you keep the party united and very strong. I will discuss with others. Go and reconcile with governors and NWC members. Make sure you truly work for peace in the party.”

It was gathered that all the leaders supported giving a ‘second chance’ to Tukur to restore peace to the party.

The National Caucus of the party was in session last night to consider the President’s opinion on Tukur.

As at the time of filing this report, Tukur was said to be explaining to the National Caucus his side of the crisis and why he should not vacate the office into which he was validly elected.

Another source said: “Tukur is not giving up at all; he is insisting that if he has to go, it must be constitutionally done. He wants the National Convention to determine his fate.

“Tukur has always been asking leaders of the party to state the basis for his resignation. As a matter of fact, Tukur raised a poser for one of the PDP leaders: ‘Have I stolen any money? What did I do wrong? Why should I be removed?’ The PDP National Chairman cannot understand why everybody is against him.

“It was in the context of the unclear nature of allegations against him that Tukur spoke with reporters on the telephone.”

But a member of the NWC said: “We raised some questions last Thursday which Tukur could not answer. Let him revisit these posers and answer them.

“Our position is that Tukur must step aside or else PDP should take the risk and forget winning the 2015 poll.”

•running a parallel NWC, leaving Tukur to take decisions on critical party matters with only his aides;

•mass defection from PDP due to lack of confidence in Tukur;

•no concrete achievements since Tukur took over in the last two years. He could not even complete the ongoing National Secretariat of the party;

•globetrotting without any result to enhance the electoral fortunes of the party; and

•lack of access to Tukur, sometimes for two weeks.

Meanwhile, a pressure group in the party, the PDP Patriots, insisted yesterday that NEC could remove Tukur.

The group also said Tukur had forgotten that he is answerable to the PDP National Executive Committee, which is constitutionally empowered to act on behalf of the National Convention, which produced him.

In a pre-NEC meeting document circulated in Abuja, the group asked PDP NEC to examine dispassionately the implications of the continued retention of Prof. Olawale Oladipo in office as the party’s National Secretary vis-a-vis the ruling of the Court of Appeal

The document reads in part: “We also commend the NWC members for coming out of their shells after being timid for a long time to take a stand in the current crises plaguing the PDP. If they did not, they probably could have faced charges of complicity, since the PDP constitution gives two-thirds of NWC members (eight out of 12) the right to take decisions, should the national chairman fail to act, and such decisions would be binding.

“They could go a step further by reversing all the decisions forced down their throats by the national chairman and report same to NEC. All such unilateral decisions made by Tukur, including serial violation of PDP constitution, should be properly compiled by the ‘’G-9’’ NWC members headed by the Deputy National Chairman, Prince Uche Secondus and brought before the NEC meeting for endorsement of reversal, so that PDP could be saved from the agony of shooting itself on the foot, as these could be counted against all NWC members at the time of reckoning.’’

“If his exit is largely seen as the solution to the myriad of problems he created for the PDP, Bamanga Tukur should gladly accept to step aside in the overall interest of the party, instead of threatening President Goodluck Jonathan, who made him the national chairman and other organs of the PDP with contempt of court, as if he is the only individual who could ensure that Jonathan is returned to office in 2015. It leaves a sour taste in the mouth.

“It is interesting that Tukur has forgotten that he is answerable to the PDP National Executive Committee, which is constitutionally empowered to act on behalf of the National Convention of the party which produced him.

“Tukur, as an individual, does not constitute the National Working Committee, or the National Executive Committee. Any suit filed on behalf of the PDP by the NWC can also be withdrawn by two-thirds majority of the NWC of the PDP, which also has the right to discontinue any suit filed before any court of law by the party.

“Afterall, Tukur in the same manner unilaterally directed that the appeal filed by the PDP for stay of execution of the judgement of the Federal High Court that removed Prince Olagunsoye Oyinlola and national officers of the party be withdrawn by Chief Joe Gadzama, SAN, at both the Federal High Court, Abuja, and the Court of Appeal, Lagos Judicial Division, to prevent the three South-west zonal officers from returning to office. “Unfortunately, Tukur disrespected the pronouncement of the Court of Appeal, and chose to respect the ruling of a Federal High Court, an action which forms part of several illegal decisions unilaterally taken by Tukur, which have opened the PDP to ridicule. Never again must stakeholders allow PDP to be managed by a dictator who cannot be trusted to function as a team player.

“We wish all our leaders and stakeholders well and pray that the Creator may give them the wisdom to put things right without fail, at their meetings this week.”

The group urged NEC to also look at the way the National Secretary of the party emerged.

“Whoever occupies the position of national secretary of a political party is the custodian of the seal of the organisation; and is like the conscience of the party, who must be free from any form of entanglements that could cause legal or moral problems for the PDP.”