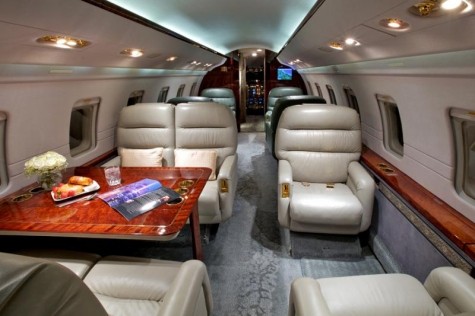 The presidency has made a proposal for an upfront deposit of N1.5billion for a brand new private jet, what will become the Presidential Air Fleet’s (PAF) 11th aircraft. This figure is contained in the details of the 2014 Appropriation Bill presented to the National Assembly by President Goodluck Jonathan through the Minister of Finance, Dr. Ngozi Okonjo-Iweala. The Federal Government has budgeted another N1.52b for the maintenance of the 10 aircraft currently in the PAF in 2014 and it is now set to spend just about that amount on a new one. This prodigious squandering of tax payers’ money is reckless and irresponsible.

The PAF already boasts of two Falcon 7X jets, two Falcon 900 jets, Gulfstream 550, one Boeing 737 BBJ (Nigerian Air Force 001 or Eagle One), and Gulfstream IVSP. Others are one Gulfstream V, Cessna Citation 2 aircraft and Hawker Siddley 125-800 jet. The combined estimated value of the PAF is about $390.5m (N60.53bn). According to industry experts, it costs a minimum of 20 percent of that figure to maintain them annually. So we’re looking at about $58.57m (N9.08bn) yearly for maintenance. Private jets are money guzzlers either in the air or land.

The proclivity of this administration for frivolous spending is well documented and has been severely criticized in the past for the colossal amount of embezzlement, rip-off and wastage that has been the hallmark  of this government. The rationale behind this new aircraft in the PAF must be condemned in hash tone.

Apparently to hush the cacophony of voices that will rise in opposition to the proposed new jet, the presidency in their usual deceitful manner, have made part payment for what can best be described as a completely unnecessary toy of comfort to an already bloated Nigerian PAF. If he can’t travel in any of the ten jets in PAF’s possession then there’s absolutely no need for an eleventh except if he needs a new one every time he flies to match the strip of his outfit.

At a time we would think the numerous editorials and Op-Eds have served their purpose on the insensitive frivolity that the spendthrift of the inept leadership of the Jonathan government now symbolizes, then came this new proposal. We must continue to resist their recalcitrance. This lavish lifestyle must be curbed.

The squandermania in government is extended to the large entourage that accompanies Mr. President on his foreign trips, one can only imagine the millions spent on hotel bills and estacodes that accrue for the government officials. According to reports, world leaders are stunned at the strangely large number of hangers on Mr. President’s entourage. The recent trip of President Jonathan in the first week of January this year to Kenya and the hullabaloo about his entourage is apt.

It is shocking that the same people who have budgeted millions for this new flying toy are aware that the country has no national carrier as I write. It is shameful that the PAF is about the third largest fleet of aircraft in the country with a total of 10 aircraft, coming closely behind Aero-contractors with 12 and Arik Air, the largest commercial airline in Nigeria with a fleet of 23 aircraft. Nigeria happens to be one of the few countries in the world with such a large PAF. It is ridiculous that this is happening in an aviation sector that is dominated by foreign airlines. Nigerian carriers are going under due to cash constraints. Countries with visionary and focused leadership like Malaysia, Ghana, South Africa and a host of others across Europe maintain only one aircraft in their PAF.

As the much publicized take-off of the proposed national carrier before the end of the year failed, it won’t be out of place to make a case for the government to seriously consider converting the PAF to a national carrier, retaining one or two for use by Mr. President and his co-travelers. The private jets can form the hub of the charter aircrafts.

What better example can be set by a national leader like British Prime Minister, David Cameron, did in 2010 when he slummed it out to fly from London to Washington in business class of a commercial airline. He was caught on camera swanning around the world in hired jets. He flies around the world on British Airways! Had it been in Nigeria, security risks, flight delays are few of the sundry reasons government officials would give for not flying commercial airline. The U.S President, Barack Obama reportedly pays for his food, ours spend almost a billion naira to entertain himself and members of his government yearly.

It amazes many Nigerians who watch in utter disbelief the gross absurdity and profligate nature the government of the day has gone about every business of governance. It leaves us in quandary how an administration headed by a former university don, one who had the humblest of beginnings – walking barefooted as a schoolboy – as well enunciated and trumpeted when he begged Nigerians for votes in the months leading up to the 2011 elections, turned the country’s ‘plunderer-in-chief’. To see him frivol the Nation’s resources in a manner that betrays his humble personae and upbringing is no betrayal of an innate part of him he cunningly hid from us.

This government has embarked on some ridiculous white elephant projects like mere renovation of official residences with billions. We can recall the uproar that greeted the N2.2billion allocated to the construction of a plush banquet hall, last year, with the lame excuse that what the country had was way smaller than what other tiny African countries boast of.

In this part of the world, only citizens are asked to cut costs, make sacrifices; the pains of today are incomparable to the joy of tomorrow are some of the ‘blues’ we get daily from government. In the same breath, political office holders to our chagrin take their spending to absurd heights. Sacrifice is a language that the over 60 percent impoverished population must understand while our leaders continue their obsession with living in opulence. They sacrifice nothing. In these circumstances, how do you convince the various Labour unions who are waiting on the flanks to embark on strike to press home their demands that there are no funds to meet their grievances? Downturn in government’s finances would be a hard sell in a situation where the presidency is competing with individuals for private jets.

It is lamentable that at a time when we still haven’t seen the infrastructural dividends promised with funds freed up from the partial fuel subsidy removed, the president is more concerned in splashing billions on banquet hall, renovation of residential apartments and covert medical tourism trips abroad.

President Goodluck Jonathan should take a break from his aimless globe-trotting in his PAF and use his multi-million naira bullet proof motorcade, to navigate round Nigeria all year round to feel the pangs and yearnings of ordinary Nigerians. This way the presidency can bring governance closer to the people.

President Joyce Banda of Malawi will be of immense help in taking our freeloading political office holders through a crash course in government prudence. As a friend of Nigeria, she will oblige.