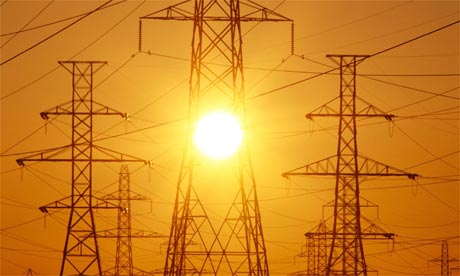 Just do a rough estimate as an individual, corporate body, small scale business fellow or artisan, of how much you spent buying fuel or diesel to power your generator for last year alone. After you come up with an estimate, think of what you would have done with that money to improve your lot, if our power sector was working. I think I would have bought a second hand car or even a keke Napep(put same on the road and make some income).

The power situation this past festive period was one of the worst I have ever seen in Nigeria. We have not really had it good when it comes to power (or even anything else), but this will rank up there amongst the worst ever. We are in 2014 and the signs are not good at all.

I was one of the first to commend the government when last year it fulfilled its promise of privatizing the power sector. It was one sector I think we needed to improve on, as the importance of power to the growth of our dear country cannot be over emphasized. Privatizing the power sector, I believed, would bring a new lease of life even if it means paying more. I still believe same, but the early signs are worrying and to think that we still  pay for services that are not rendered at all, amounts to scam.

Recently the minister of Power Prof Chinedu Nebo, blamed the activities of vandals on power stations (which makes for shortage of gas) for the darkness we have found ourselves in. What is happening here? First we were told that it is a new dawn (with the privatization) and the next thing  we are getting are excuses for failure. We have been having the same excuses over the years and one can’t but ask if nothing is being done at all to curb the excesses of the vandals.  What we should be hearing is how this has been curbed to it’s barest minimum or what is being done to stop same.

Are there no security operatives guarding these power stations? These are national assets for crying out loud and should be jealously guarded. The civil defense and its likes responsible for guarding and protecting these stations should be empowered more so they can work effectively. The corrupt ones in power, who tend to connive with generator dealers some of who pay these vandals to destroy our national assets so as to remain in business, should be identified and booted out.

There should be stiffer penalties for anyone ( as well as their sponsors) who gets caught in the act of vandalism. This will act as a deterrent. This should be all out war as it is our country as well as her economy that is at stake. For me, with a functioning power sector we are half way to the Promised Land.

Most of all, I think we need to keep these  vandals busy by creating (more) jobs. Some of these guys are angry at their country. They are idle and frustrated. They are angry that even in abundance there is so much suffering in the land (especially the Niger Delta where a chunk of the contries wealth come from). They take out these frustrations on our facilities, or better still sell their services (in this case violence) to the evil ones amongst us. Creating jobs, I believe will reduce vandalism to a great extent.

It is not just enough to tell us vandals are the reasons we are in darkness and nothing is being done about same. Vandalism is a monster successive government created and we must man up to deal with it.

Now I am not saying the power sector should be working at a 100 percent overnight ,of course it will take a little while (the telecommunications sector did not do it overnight), but for Pete’s sake this is a very terrible way to start. There is no light at all! Nigerians are burning away, what with the heat. Businesses are folding up at an alarming rate, artisans do not even bother any more, and people are losing jobs and choosing crime. Something needs to be done and fast too as the power sector is so critical to the development of our country.

I think in their heads they think of us as ignorant bastards, but don’t blame them for thinking such about us, because we have shown them over the years that we somewhat are. In fact by reducing the money from 49.8billion dollars to 10 billion dollars, they must have thought, should have made Nigerians chill, because we always chill.

They said the 10 billion dollars was spent on oil subsidy payments (this same subsidy shaaa), repairs of vandalized oil pipelines (it must be all the pipelines) as well as operational costs (whatever that means), and the balance is yet to be reconciled.

First of all can we reconcile the balance already? Secondly, Nigerians are not buying this explanation. It is so casual. It has nonchalance written all over it! We need, as a matter of urgency, a thorough breakdown of how the money was used, and then we can believe we are ready to tackle corruption which is killing us. The earlier the reconciliation is done as well as a breakdown of how the money was used, the better. Otherwise we have no choice but to believe the money was stolen. 10 billion in dollars is a hell lot of money not to be thoroughly accounted for. 10billion dollars can contribute a lot to making Nigeria a better place!

If proper account is not done and nobody is brought to book for this, then somebody should please tell Jim O’Niel ( who has predicted Nigeria amongst nations to become world’s biggest emerging economies thus coining MINT-Mexico, Indonesia, Nigeria and Turkey) to remove the ‘N’ in his MINT as we are not ready yet. Not with corruption.