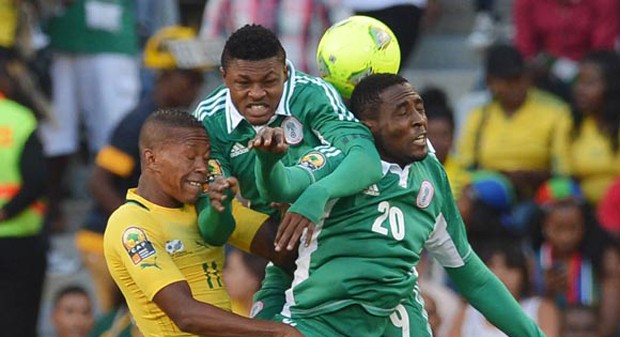 Pocket-sized Super Eagles midfielder, Chrisantus Ejike Uzoenyi, has revealed that he almost passed, when Ghanain defender Kwabena Adusei, elbowed him in his next region leading to a minor concoction mid-way into the first half of the CHAN semi-final clash between Nigeria and Ghana in Bloemfontein, South Africa.

Team medics described Uzoenyi’s condition at the time as Cortica Artery seizure, noting that it took quite a while to get his pulse back from the leg region. “It was scary but we thank God, it didn’t degenerate more than that and the player’s recovery rate was phenomenal”, one of the medical official attached to the team noted.

The player himself was quoted by Team Media Officer, Ben Alaiya, as saying he momentarily passed on and didn’t know what was happening until he was stretchered out for treatment. “That player wanted to kill me with that vicious elbow and I was blank and did not know where I was until I started hearing noises, but I was determined to continue that was why I was rushing back to the pitch. But I think it was God that saved my life because some lesser cases have resulted in fatalities”.

Uzoenyi, said he was still sad that the Eagles lost the match after his near fatal accident and promised that he will be ready for the third place match against the Warriors of Zimbabwe. “It’s the only thing we have to leave here with and we are determined to compensate Nigerians with a third place finish”, he said.

Zambian referee, Janny Sikwaze, also received blames from soccer fans across South Africa for being too casual and at times absent minded in the handling of the Nigeria-Ghana match. “It was really scary that a player will commit such an offence and still was left on the pitch by the referee, CAF must take note and deal with this matter before players like that commit murder on the pitch”, declared Emmanuel Addo, a Nigerian, who is here for the tournament.

Lucia Sanele, a South African said she saw the bestial side of football from the Ghanaians and wondered if the organizers were taking notes of what was happening on the pitch. “We must find a way to excuse brutes from the game of football if the game must maintain its entertainment values”, she said.