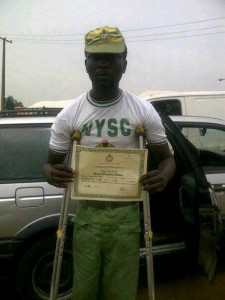 Edmund Burke must be having a character like the ousted NYSC DG, Brigadier General Nnamdi Okore -Affia in mind when he said that “The only thing necessary for the triumph of evil is for good men to do nothing”. The decision for his removal was a welcome development and long overdue owing to his gross incompetence, negligence of duty and the lack of concern for the human person, dignity, as regards the welfare of both corps members and staff members.

Based on my experience, it is an open secret that Brig-Gen Okore did not care whether a corps member lives or die. Having graduated with a second class (upper division) from the department of Local Government Studies, Obafemi Awolowo University, I was posted to Sokoto State to serve in 2012 Batch B mobilization list. As I left for Sokoto State for the National Youth Service, I was eagerly looking forward to a fruitful service year. Well, the unexpected happened! The accident occurred on July 3, 2012 and I left Lagos the previous day for Sokoto State where I was posted for service. We were attacked by some Fulani herdsman in Kebbi at about 4am. The attack was unexpected. The driver had lost control of the vehicle and the two tyres burst. The bus swerved into the bush. I had a fracture on my limb and a dislocation on my hip.

As I crawled out of the mangled bus, I discovered that I had had a fractured leg and a dislocated hip. Others in the bus, including youths also going to Sokoto for service, sustained various degrees of injury.

Writing in pain for two hours, I can only describe the accident as a close shave with death because it was by divine intervention that the injured passengers were rescued by policemen, who came to the scene. When the police came to the scene two hours after the incident, we were taken to a hospital in Kebbi State for first aid treatment.

It was then that I realized that Nigeria was not a country worth dying for. If it were to be in a sane society, the head of NYSC would have visited us in the hospital. All the treatment I underwent, I paid for. It took a year after, and the intervention of Dr. Goodluck Ebele Jonathan, the Nigerian President and Commander-in-Chief of the Armed Forces before the NYSC refunded my medical expenses. No help came from NYSC, or any of its staffs visited while I was in the Hospital, just in a bid to serve my fatherland. This was sad!

More worrisome and pathetic thing to know was that months after my bitter experience because I wanted to obey the clarion call to serve my country thorough the NYSC programme – an enviable government agency with records of good and dedicated leaders like the former DG, General Mi Tsiga – did not bother what became of me in terms of my health, welfare, compensation, employment, and even a scholarship despite the fact that my health still requires urgent medical attention as I still have iron in my leg and I cannot walk without clutches.

The sacked DG never bothered about how I would get further treatment, nor made provisions for me. I have since been left with my fate, when it is obvious that none of the NYSC DG’s children and staffs will post their children and relatives to a volatile region as far as Sokoto State for the mandatory one year service.

I thank and commend Dr. Goodluck Jonathan for this historic decision to remove such a charlatan like Brig-Gen Nnamdi Okore-Affia from the sensitive position of the Director General of NYSC.

I equally use this medium to thank my family members, most especially Mr. Steve Babaeko, MD/CCO of X3M Ideas for his unwavering, support, moral advice, spiritual bulwark and financial security.

On a final note, I congratulate the newly appointed DG, Gen. Johnson Olawumi for his new appointment. I urge him to hit the ground running by ensuring some certain reforms are carried out for the scheme to meet the dreams of its founding fathers. He should also make the welfare of the corps members and staffs paramount.

I also appeal to him to endeavour to review my case and that of other corps members who were victims of circumstances under the immediate-past leadership and leaderships of NYSC. We expect the new DG to kindly treat our case scrupulously and meticulously.

Conclusively, I appeal to the dynamic Dr. Goodluck Jonathan to give my letter and humble request a speedy, swift, and favourable response before it is too late.

Views expressed  by contributors are solely theirs and not that of Omojuwa.com and its associates