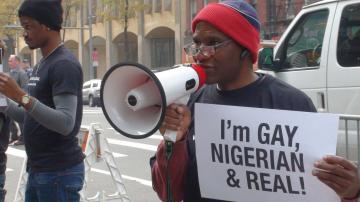 The concept of Homosexuality is an abomination according to the Holy Books, a taboo in African tradition and also to every extent it is morally wrong  but that is not enough reason to hate or condemn anyone for being homosexual. Religiously and morally it is wrong to hate anyone for their choice or opinion in life but with the hate and condemnation homosexuals receive from everywhere especially from Nigerians one would think homosexuality is the only abomination in the eye of God which is not true.

Many of the things we do and see as normal are abomination in the sight of God but the society makes it seem like homosexuals are the greatest sinners in the sight of God, according to Ezekiel 18 v 10 – 13, homosexuals aren’t the only ones committing abominable offences even bankers and almost everyone involved in politics commit abomination but the society sees it as normal.

Instituting laws and tagging them like criminals shouldn’t be a state issue, what two consenting adults do in private shouldn’t be a problem to the society and shouldn’t be an issue to be discussed in the parliament. Hating and condemning them won’t solve the problem of homosexuality, how do you convince those you’ve shown hatred to repent from their wrongdoings? Besides, making it illegal doesn’t make it go away.

The anti gay law cheapened our democracy and will probably pose more danger to the freedom of Nigerians than any other law in our history because there’s no way to prove anyone is gay and with the law enforcement agencies we have in this country more innocent people will be arrested, black mailed and tortured as gays and soon the law will be used as a weapon to settle personal and political scores.

More ground studies should have been done to itemize other options before laws are passed, that is why in America, not all states have legalised this act. The Okada ban law in Lagos is a clear example that in Nigeria the law enforcers don’t really understand the laws they’re enforcing neither do they know how to interpret laws, A law like this will give rise to many wrongful convictions and vile mob actions.

Religiously, Homosexuals are like lost souls, they’re in sin but don’t know, to make them realise their mistakes they must be shown love and respect, prayed for and taught to be true to the order of nature,, by doing this we can convince them to forsake their wrong choice and change for good.