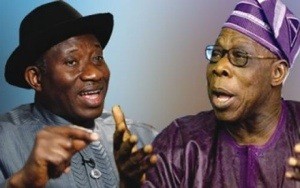 Dear Chief Olusegen Obasanjo, I read your letter to President Jonathan, and did not bother to reply you for obvious reasons. The letter was not addressed to me and as someone who is honing his skills in the field of law; I considered it inappropriate to respond as I was not privy to your previous meetings with Goodluck Jonathan.

Sir, one must admit that you raised salient issues in your letter that no well meaning Nigerian will turn a blind eye to. There is no gain saying that Goodluck Jonathan is popular for the very wrong reason and has not shown the best quality of a true leader. In a nutshell, he has not lived up to the desired expectations. I am seriously not disappointed because I have learnt not to repose confidence either in you or your protégés. Anyway, I am happy you wrote that letter because it exposes not just Jonathan’s failure, but yours too.

As mentioned earlier, this is not intended to serve a reply to your letter, but to draw your attention to some issues your raised. I am surprised that you of all people will accuse Jonathan of being a tribalist. Sir, during your time, you were more than a tribalist. You fanned the embers of religion and ethnicity and sought to bring this country to its knees, just to achieve your selfish motive.

You talked about Jonathan training snipers to wipe out perceived political enemies. Sir is this not a clear case of a pot calling kettle black? During your inglorious days as president, didn’t you a operate a killer squad? Of course your answer will likely be in the negative. But until you tell me who killed Chief Bola Ige, Chief Harry Marshal, Chief Aminasori Dikibo, Saadatu Rimi, a PDP gubernatorial aspirant in your State, Ogun, just to clear the coast for your preferred candidate and a host of others killed under your reign as president, I will not believe you.

Was it not you Obasanjo, and some governors in the Niger Delta that gave guns to the youths in that region to help you rig elections? When they refused to return the arms, you tagged them Militants and Criminals. You also did same in certain Northern parts; where no militant groups exist, you created one to help rig elections on your behalf. Hmmm, it is because Nigerians forget too easily, otherwise sir, you would have gone back to where you were before you became president.  During your tenure, you were corruption personified. Issues like Seimens Scandal, Halliburton, etc, remain ever green. You appointed yourself Minister of Petroleum resources, where you wrecked havoc to this country. Sir where is the N16 Billion you stole under the Nigerian Integrated Power Project(NIPP)? Do you need to be reminded about how you subverted the constitution and flouted court orders just to have your way? Some governors that were not in your good books were impeached with reckless abandonment and a particular governor was humiliated and kidnapped while you looked on and cheered his captors. Sir, you need to bury your head in shame. You fought the Vice President and reduced him to nobody within the Villa, just because he sought to contest against you. For your third term agenda, all I’ll say is thank God it failed!

You may also wish to tell us where you got the money to establish Bells Group of Schools, including a University. Sir, you know too well that apart from being a former Head of State, your were practically broke before 1999, but you transformed from a broke man to a multi- billionaire within a span of 8 years, after holding office as Civilian President. It is men like you who have rubbished the word service in politics. You battered politics in Nigeria and turned it into a money making venture. No wonder good leadership elude Nigeria, because of your fetid legacy.

These days you are courting controversy and is indeed enjoying it. Just when your letter to President Jonathan was beginning to calm down, you wrote another letter to  the PDP Chairman telling him of your decision to leave the party. With greatest respect sir, you love to flatter yourself. I wonder who is deceiving you by telling you that you are relevant in this country. Anyway, I know it is your retinue of sycophants of which Femi Fani-Kayode towers above others. If you like, leave the PDP or sink with it, Nigerians do not give a damn! Nigerians have had enough of you and your kind.

If you think your recent outburst qualifies you to be called a progressive, then you are totally wrong. You probably qualify as a progressive within the ranks of All Progressive Congress(APC), a party that has lost focus and is busy canonizing criminals into saint. The sainthood you crave may be gotten from there and not from Nigerians.

Goodluck Jonathan is a burden Nigerians carry because one man thinks he is all knowing, the alfa and omega and must decide the future and destiny of the country. Jonathan is merely continuing with your legacy and when the anticipated wind of change comes, Chief Olusegun Obasanjo will also not be spared. You owe Nigerians an apology

The views expressed above are that of the author and not necessarily that of Omojuwa.com or its associates