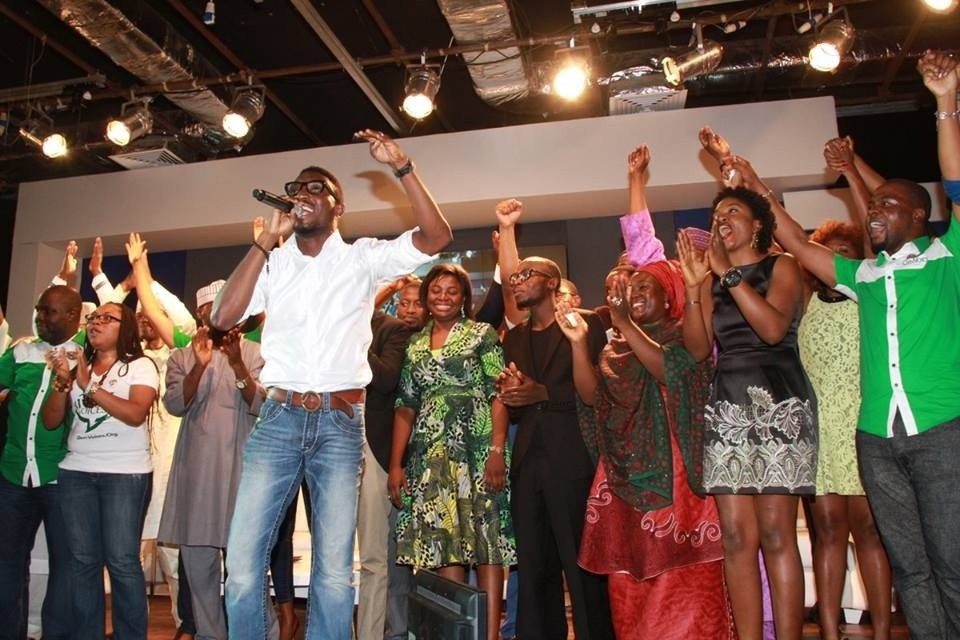 I’m happy that I was not a distant witness of Generational Voices. Having been closely involved, and in a deep thought, I see a movement about to be built on the foundations of OccupyNigeria, that deferred revolution. But as beautiful as its grand visions are, we have to resist ideological indoctrination and correctly understand that GenVoices is not OccupyNigeria. This is where our task commences!

Last week, I was in Lagos for the GenVoices telethon and the experience was one that assured me of a will to infiltrate the ranks of the owners of Nigerians by what a speaker at the event called “a threatened generation.” Our predators are the all-powerful families, cliques and friends whose idea of “development” has cost us a sane nation. GenVoices is an audacious rescue mission, exploring the anger of a generation denied an opportunity to be meaningful! Still, GenVoices is not OccupyNigeria. While the former is a stationary car about to embark on a journey, the latter was a moving car that had no idea of where it was going and thus we lost our way when more enlightened passengers in the struggle hijacked the movement for, well, filthy lucre we may charge. OccupyNigeria failed because we were ill-prepared for the cause, and also because we couldn’t harmonise our demands beyond the initial grievance against the removal of fuel subsidy. Some argue that OccupyNigeria was hijacked by the labour union; I prefer to simply refer to it as a revolution deferred. This is my highest uncritically expressed optimism in the young Nigerian. A revolution deferred.

It was easier to sell OccupNigeria. A sentence or two shared on Twitter and Facebook and an offline demonstration inspired a generation to stand up and fight for their rights. That was not magic; it was because what we set out to challenge affected the grassroots in even worse measure. It’s easier to convince a man that fuel price hike is a sham. But if you go to the average Nigerians and begin to tell them of a possibility of complete social change, I fear it wouldn’t be so easy to find sympathisers let alone followers. And that is the slippery ground of mutual incomprehension our generation needs to tread on in this clamour for collective decency. Yes, the generation is polarised. And I’m not even talking about the clichéd thesis of religious, ethnic and regional disharmonies here. Our voices are already monotonous, and unless we seek and amplify the distant voices, the sound of our revolution may be uninspiring. As we’re about to start the car for this rescue mission, we must make attempt to bring the “Us” and “Them” of this generation together; the “them” whose voices are never heard, those in parts of Nigeria where Twitter and Facebook are not known at all, those to whom all of “us”, privileged and educated, are seen as accomplices in the looting of a nation. What about them? How do we assure them of the possibility of a needed change without being seen as agents of delusions and hypocrisy? What’s this generation really without those Nigerian youth outside cyberspace? The last time I checked Facebook had just about 11 million Nigerians, and we have almost a hundred million who, by virtue of age, ought to be registered here.

GenVoices is anybody’s project; it’s an ideal for which all of us must be stakeholders. I understand that it sets out to rouse a definite political consciousness among the youth of this generation who may otherwise be perpetually reduced to “youth” by a clique whose families and friends have been in charge since October 1, 1960—until they’re in their fifties. And, as you know, the life expectancy of a person born here, surrounded by poor healthcare and explicable crises, does not favour such a long process to maturity! So now is the time to drop our escapisms and excuses to unify the voices of this generation if we’re actually ready for a joyful ride into history, as some speakers and panelists highlighted.

Wait, I have to address this: during the telethon, I find the view aired by a certain young panelist, who introduced himself as an aide of a senator, very disturbing. His take was, as an aide you have an advantage to practically be in control of your boss, citing his own records as a senatorial aide. This is, to be polite, ridiculous! There’s a limit to the extent you can influence a politician. If I had been on that panel, my response would have been to ask the young man to go ask the senator-he-controls to “move a motion” against the scandalous wages the lawmakers earn. Well, that may cost him his job. That 469 federal lawmakers defraud the nation, gulping 25 percent of the nation’s budget, which means the basic salary of an individual lawmaker is 116 times the country’s GDP per person of $1,600.00, is the height of ridiculousness. For the Nigerian lawmaker has been ranked by the Economist magazine as the highest paid in the world. Congratulations, Nigeria. This is the only record in our history that no country has ever beaten. And yet we gave a senatorial aide a platform to insult the sensibility of the nation? Ridiculous!

So GenVoices is to end that tradition that reduces the youths to mere aides. We deserve more, more presence as substantial and influential leaders, not as adjunct and inconsequential servants. For this shared belief, we’re all “comrades in struggle” and we must welcome all, including the critics of the movement, one of whom has already attacked me for merely honouring an invitation to the telethon at all. My critic, a blogger named Chukwudi mentioned me in a comment on Facebook where he wrote: “I’m surprised why my good friend Chude Jideonwo like (sic) isolating the core Nigerian youths from the scheme of his programs. Was even surprised to see Gimba Kakanda at the event. The same Gimba kicked against Future Award and wrote long essays to that effect. For Gimba to identify with elitist Gen Voice organized by the same person he criticized his hustle in the past left me mouth agape. Well Gen Voice without involving the core Nigerian youth is an effort in futility and at best show off. The last time I checked, the mainstream of Nigerian youths are not the social media champions.”

Thank you, Chukwudi. And while you have not even read my take on this movement, it’s understandable that you have criticised my participation to that effect. Listen, my criticisms of The Future Awards remain unchanged, purpose of which was to remind Lagos Blogs and mainstream media that Nigeria is bigger than the size of their blogs and televisions, and puncture the delusions of these “social media champions” of which you and I are members. Yet here, I applaud your observation. I was in Lagos to share my views on the divides in our generation, but you have to know that GenVoices, unlike The Future Awards, is not a celebration of “achievements”, rather a mere sampling of our generation’s monotonous voices. I was there simply because I write – a faint voice seeking more notes to amplify. The next phase of our campaign should be to assure ourselves that voices of this generation goes beyond the musicians, actors, politicians, bloggers, activists, and writers. The voices of this generation are also the harmonies of anguish, dejections, and disappointments expressed by fellow citizens outside our media coverage; they’re represented by the fraternities of peasants, artisans and non-union workers across the country. Their voices are harmonised because they’re melodies of the same subject: poverty. Unless we ally in this struggle, this revolution may be dismissed as another of our generational noises. May God save us from us!