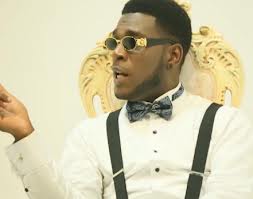 So I read the exclusive report on Bellanaija .com that Burna boy exited The Headies 2013 on Thursday 26th of December 2013 when Sean Tizzle was  announced winner of The Next rated category. Yes! Burnaboy is a talented artiste who made his mark in 2013. But if the award organizers deemed it fit to give the plaque to a more deserving artiste …then Burna should have swallowed the bitter pill and moved on with his life. Other acts who were nominated in the same category didn’t take their leave according to reports. It is human to feel bad when you don’t get what you feel you deserve, but Burnaboy’s reaction is just puerile. Same goes to Orezi who lost out to Waje and then took his dissatisfaction to Twitter. They acted like kids who got angry because they were refused chocolate

An award doesn’t pay your bills. It only changes your   public perception  and   acceptance .If you win an award and you are not able to leverage on the buzz and platform it  creates for your brand,  then you are on the same level with someone who doesn’t win. This is my counsel to you Burna boy and other bad losers…learn to lose successfully. An award only endorses your hard work and work ethic.

You don’t need an award  to validate your competence as an artiste. At the end of the day, you will be remembered more for churning ever green music, not for winning awards that will gather dust and attract maggots later. Focus on your career, glam up your music, expand the brand, and just be your best self. You don’t need an award to validate your competence. The fact that you were nominated is an indication of the fact that your music is worth being recognized and you are taking steps in the right direction. I love the way Waje puts it in her Tweet:’ The truth is we   are all   winners, as cheesy as it sounds, so stop all these who deserved what. 2014 is around the corner’

Femi Kuti has been nominated for The Grammies on several occasions and he hasn’t won any of those grammy plaques. Yet he is still very relevant . Focus more on producing good music and in the process if you win an award …well good   for you. Your preoccupation shouldn’t be about winning awards, but about building an irresistible showbiz brand that will dazzle years to come.  Nuff said!

Kehinde Ajose is a sought after publicist and talent development strategist who helps people to discover and develop  their talents in order to create wealth and become iconic brands brands.Follow him on twitter-@splendidkenny