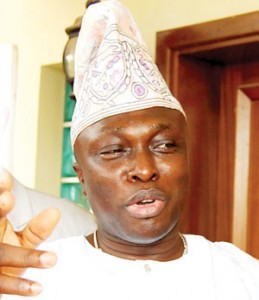 Monday 25th of January 2010 will forever remain tragic in the hearts and minds of friends, family, supporters and admirers of Otunba Adedipupo Dina (DD Direct) who was murdered in cold blood on Sango Ota road in Ogun state.   It is especially painful to individuals like me who saw the late politician as a strong hearted, fearless and patriotic indigene of Ogun state who, above all, had the interest and well being of the people at heart.

The tale of his death is still a tragic best told by his driver who witnessed the unfortunate incident. There were two sides to the story; one told by the police and the other by the driver. The police story had it that Otunba Dipo Dina was attacked by armed robbers and while they demanded  money, Otunba Dina, instead of obeying resorted to dragging guns with them, this, the police claimed angered the bandits and the bandits shot Dipo Dina before zooming away with his car and driver. The second side told by the driver was quite different from the tale of the police report. The driver claimed that a team of hired assassins stopped the moving SUV and ordered Otunba to come dow. Otunba came down gently and  he was then told that some group of individuals have paid handsomely for his life and they were there to take it. Before one could  say ‘Jack’ rains of bullet descended on DD and the rest as they say, is history.

Looking back at the stories four years later and the inability of the police to bring to justice the perpetrators of this act, I am forced to believe the story recounted by the driver on the event of that sad day as against that of the police. Beyond my reasonable doubt, the event of Monday 25th 2010 was the handiwork of political shylocks who were hell-bent on removing a perceived obstacle militating against their political aspiration. Individuals like me and lot of friends and family share the same perception with me. Unfortunately, most of us, for over four years looked in the wrong direction on who may have been responsible for the death of DD direct.

The pieces of the scattered evidences on this case can easily be picked together with the current political crisis rocking the state.

Otunba Dipo Dina was one of the founding fathers of Action Congress of Nigeria (ACN) in Ogun state, in fact he single handedly promoted the party and positioned it as a formidable opposition against the ruling People’s Democratic Party (PDP) and so it wasn’t far-fetched that the leaders of the party in Lagos stormed the Ijebu-ode residence of Dipo with bitterness and grief or so we thought. The party leaders promised among others things to ensure that the architect of this evil will not go on punished. It vowed that if the then Action Congress of Nigeria gets power it will, as a matter of priority, seek justice for the blood of DD. Coincidentally, the current governor of Ogun state, Senator Ibikunle Amosun was present on that very day when the vow was made. In fact, he wrote in the condolence register thus:

“Dipo, how cruel can people be? Those that murdered you will know no peace, their children’s children will know no peace. They have turned Ogun State to a killing field. Be rest assured my brother, the struggle you so ferociously fought for will be followed to a logical conclusion – And all the evil forces of darkness in Ogun state will be removed. God will expose them. Rest in the bossom of the Almighty Lord. Adieu, Adieu, Adieu my brother Dipo.”

Alas, it’s been four years since that Greek promise was made and the steps taken by the then Action Congress of Nigeria (ACN) led government was nothing but a pointer that the tears and screams on that day were nothing but a scripted drama channeled only to deceive the innocent and frustrated family and friends of the late Dipo Dina and, by extension, the people of Ogun State.

The only recorded step taken by the governor was renaming the Ijebu-ode International Stadium after the slain accountant. Other than that, the governor has done everything within his powers to ensure justice is not served. The sudden refusal of the state government to proceed with the case and the mysterious withdrawal as a result of directives from the governor to the state Attorney general and Commissioner for Justice are pointers to the deception laced around the promise on that day. If that is not enough, the dramatic acquittal of Mathew Asumoh, Kabiru Amao, Oluawafemi Teslim and Moruff Dauda – the four individuals arrested for taking the life of DD – on the orders of the governor was shocking.

Well, facts may be wrong and events may just tally but ever since Gov. Amosun got to power, political assassinations and violence have never seized in the state. In actual fact, it has been on the increase as the state has witnessed a lot of unresolved murders of notable politicians like Toyin Hamzat – the former chairman of Ikeja local Government and a strong member of the Action Congress of Nigeria who was rumored to be preparing to contest for the governorship position of his state under the ACN platform but was gunned down on his way to Aiyepe. The death of Otunba Ismail, another chieftain of the ACN and a strong loyalist of Aremo Olusegun Osoba who was warming up to contest for the Chairmanship of Ogun waterside local government against the desire of the sitting governor was mysteriously killed in a motor accident while returning from Abeokuta.  What about the death of Yomi Bamgbose another strong supporter of Aremo Olusegun Osoba who was murdered in cold blood right in the capital city of Abeokuta? Even if I forget everything, I won’t lose memory of the death of the Vice chairman of the ACN in Ipokia local government slaughtered in the middle of the night by some yet to be identified hoodlums. He, like many others was an unalloyed loyalist of Aremo Olusegun Osoba. Is this then a calculated ploy to eliminate perceived enemies of the state?

Four years after, the motive behind Dipo Dina’s death is still a mystery. While most of us might have blamed the past administration led by Gbenga Daniel for having orchestrated the act, now I have cause to believe that we were played upon by some agents of evil to achieve a selfish objective. Unfortunately, the blood of DD was used as a connecting point to achieving that.

Before drawing this conclusion I have asked myself the following questions which I believe every one of us should ask ourselves. Why is the state government led by Gov. Amosun finding it so hard to press charges against the arrested perpetrators of this act? What meaningful steps aside the lip service has the government embarked upon to solving the mystery surrounding the death of DD, even when a party he fought and died for is now in power? Was Gbenga Daniel really responsible for the death of DD? Who benefitted most from DD’s death as he was hell-bent in holding command of the party in the state? Would Amosun have been ACN flag bearer if DD was alive? If truly Gbenga Daniel killed him, then to what end? Who needed the party structure he now holds to contest for power?

The answer to these questions lies in our subconscious minds. To those who murdered sleep, they will forever sleep no more.. Adieu Dipo, Adie Dina, Adieu DD Direct!

Views expressed in the above article are that of the author and do not necessarily represent the views of Omojuwa.com nor its associates