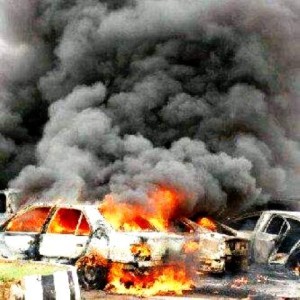 It was just about two weeks to my Passing Out Parade. I was ecstatic, not just because I would be free from the shackles of the compulsory year of federal incarceration, otherwise known as NYSC, but also because I was now sure that I was not going to join the unlucky multitudes that wallowed in post-degree idleness. I had recently been granted employment with a reputable media house. Quite unfortunately, the pay was not as reputable as the name – I could not care less though, if I worked hard enough, I would be rewarded accordingly.

The beautiful morning sun that hung over the earth, like the coconut hung on its tree, was as comely as I’d ever seen it. It shone tepidly, prettifying its gaze and making my skin glow like the ones from those exotic body cream television commercials.

I was now counting the days until I would no longer have to wear this corper’s uniform, until I would bid the school where I taught a final farewell. For now however, I had to keep working. I walked briskly towards the junction where I would pick a bus that would take me to school, taking in the sanctification of the appealing sunlight and nodding my head to the tuneful melody of the now defunct ‘styl plus’ that emanated from my earphones. Life couldn’t be better.

When I got to the junction, I saw my friend and fellow corper – we taught at the same school. He taught Mathematics and Further mathematics – subjects that were definitely not invented with brains like mine in mind – while I taught English Literature and French. I was not really qualified to teach French as I only studied it till secondary school level myself, however, since there was no other teacher who knew what the word ‘French’ meant in French, and since the principal saw that I made a ‘D7’ in the subject in my WAEC, I was deemed fit enough to teach the whole school.

My friend and I stood there at the junction talking about ‘hot girls’ and waiting for the next bus to arrive.

‘One chance, one chance, one chance,’ the diminutive bus conductor said, most of his body was outside the white bus, only his right leg and his right hand – with which he held on to the interior of the vehicle – were inside. Since he got to the junction before me, it was only fair that I allowed my friend to go, as there was only space for one more passenger.

‘Later men,’ I said as I waved him away. I put my earphones back in my ear and started nodding again, this time, to Fela’s timeless classic – ‘Shakara’. I did not have to wait long for another bus to arrive. This one was yellow, the normal commercial vehicle colour. I waved it to a halt and told the conductor where I was headed. I entered, sitting on the front seat next to the driver who wore a white singlet. ‘Morning,’ I said referring to nobody in particular.

The conductor answered. ‘Bros, how far?’ then he stretched his hands towards me to collect his money. I brought out a rumpled fifty naira note and placed it in his outstretched palm. I had been inside for barely three minutes when it happened. First, there was a strange and infuriating screeching sound as if something metallic was scratching the tarred road below us and then the loud BOOM sound, I knew it was an explosion, explosions were relatively frequent in these parts, what I did not know was that it was our bus that had exploded, I had no time to think about where the sound emanated from. The last thing I remember was being plunged out of the vehicle through the windscreen, the sound of shattering glasses drowning everything else.

News revealed that a terrorist organization had taken responsibility for the explosion. It killed fourteen out of the seventeen of us.

I am unlucky to be alive, maybe it would have been much better if I had died along with those fourteen people; death is much, much better than the situation I am in at this moment. I am paralyzed from neck down and blind. My dreams are over, every single one of them. So tell me, is death not better? My mum says I should have faith, that our God is a God of miracles. I believe her.

The views  expressed above are that of the writer and not necessarily that of Omojuwa.com or its associates.